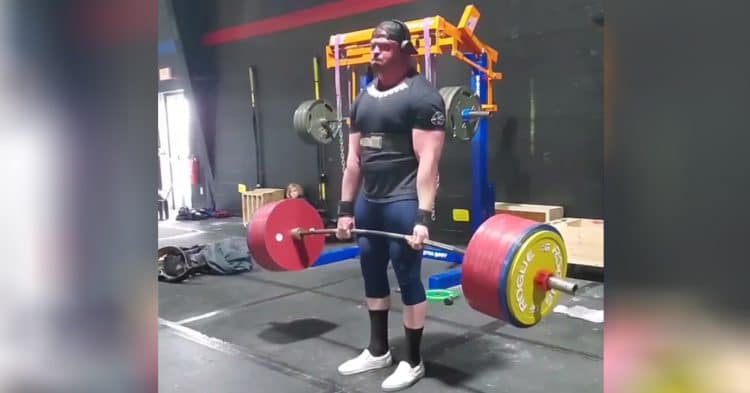 This beat a previous personal record set on February 6, 2021, when he pulled 428 at the Pro Open Raw division of the Northeast Power Bowl USA competition in Allentown, Pennsylvania. That lift was nine kilograms above the current world record. That record was 419.9 kilograms set by Konstantin Konstantinovs.

This week’s deadlift was performed raw with a lifting belt and lifted in training. He was stoked by it, noting, “971 pounds, baby” when he posted it to Instagram.

Chris Weist has been in nine full powerlifting competitions and has 8 firsts in his career. His personal bests to date include:

These are lifts with wraps, as is how Chris Weist generally competes.

It is clear that he is on a mission to continue beating his personal bests. He has now added almost 30 pounds to his record of PRs.

Chris Weist is a powerlifter that can lift his girlfriend with one arm. And he’s got a record of popular lifts on Instagram that match that sort of ease and style. She is another branch of his personal bests.

My #1 supporter Helping me be the best I can be, Must be a lucky charm, 2 meets in a row with her with 2 big accomplishments 2230 total and Atwr DL 😉

He also has popular lifts right after a competition.  Here’s one where he describes himself as “beat up” after competing when he’s lifting 800 pounds.

4 days post Max pull so still beat up a tad but need to get prep back on track, had some hip issues today, everything felt fine but my feet were not lining up (Nick pointed this out) hitting up the chiropractor to get my hips put back into order and hopefully move on from here!”

It is clear that he is on a mission to continue beating his personal bests. He has now added almost 30 pounds to his record of PRs.

WATCH: Strongman Robert Oberst Eats As Much Sushi As He Can (15,000 Calories)