Sometimes a story comes up that’s so weird and outrageous that there’s no way you would believe it’s real.

However, thanks to modern-day men being equipped with high-quality cameras outrageous stuff gets captured on film every now and then.

This is one such case, as a powerlifter Evan Kardon shared a video in which a local gym goer literally sits on Evan’s loaded barbell in protest and won’t allow him to deadlift the heavy ass weights.

Here’s what Evan wrote in the caption;

So this happened… while getting to take my last warmup set of deadlifts this member(does NOT work at fitness connection) offended by my use of chalk decided to take it into his own hands to prevent me from working out!

Before this moment he stood a few feet from me for 10 plus minutes waiting until I would chalk my hands again. He then sat on the barbell like that for over 15 minutes waiting for the manager to come!

The second clip is him watching me for another 10 minutes as I remove the plates from the barbell and clean it!

Wanted a big deadlift for my birthday but sometimes life throws you curveballs like this!

In the comment section, Evan gave some more details regarding this issue; He claims that the angry gym goer first stalked him from a distance watching Evan’s set up, then as he was getting ready to deadlift the man went in for the sit waiting for a gym manager to arrive.

The issue at hand? Evan’s usage of chalk in a chalk free/forbidden area. When you put things like that, the reaction kinda/sorta makes sense.

I mean, it’s a complete and utter overreaction but if the rules say “no chalk” then don’t use the damn chalk! However, it seems that the issue isn’t as black and white as it may seem. Evan is dropping more backstory to the issue on his Insta stories and here’s one of them. 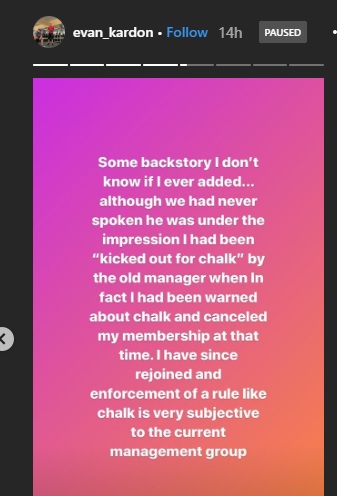 So according to him, the “no chalk” rule isn’t exactly set in stone, depending on the management they give some slack to the rule. Also, it seems that the angry cap guy was under the impression Evan was already kicked out once because of chalk usage when it fact Evan was only warned about it when he decided to cancel his membership.

Of course, some internet conspiracy theorists have suggested Evan created the whole thing as a self-promotion stunt for his social media, but he denies such claims.

However, this isn’t the first time someone got triggered in a gym by a Deadlifter. Last year, the entire fitness community was united in hate towards a very arrogant gym-goer who literally kicked out a barbell out of a teenager’s hands because his deadlifts were too loud.

It didn’t even take long for the internet detectives of the world to find out the man in the video and make his social media life a living hell.

So yeah…as much as this look fake-y and far fetched, there’s a solid chance this is legit. Stupid people do exist and they tend to do stupid things…it just so happens that nowadays we have access to cameras that allows us to capture the said activities.