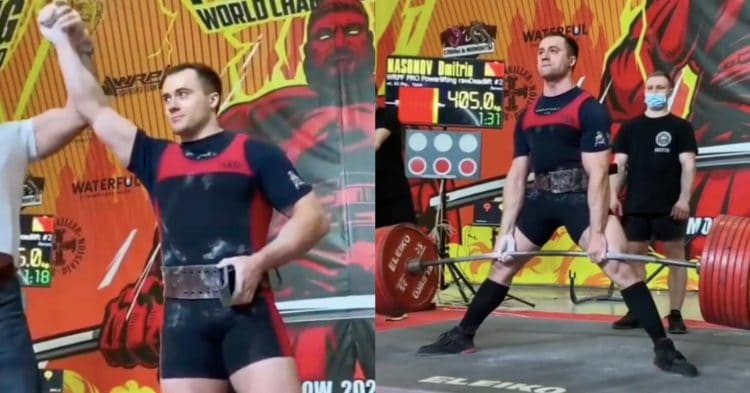 Over the years, Russian powerlifter Dmitry Nasonov has established himself as likely the best in the world when it comes to the deadlifting in the 83kg weight class. He cemented this status recently, with a performance at the World Raw Powerlifting World Cup in Moscow, Russia, on December 20th, that saw him hitting a new all-time world record.

At still only 28 years of age, Nasonov has a ton of experience, having competed as powerlifter for nearly a decade. While he has yet to compete outside of Russia, the WRPF athlete has really hit his stride in the last few years, even capturing a world record for his 400kg deadlift in 2017. Since then he has been chasing that number again, looking to push past his own limits to extend it.

Well over the weekend, he finally did just that. Competing for the fifth time this year, Dmitry Nasonov took part in the WRPF World Powerlifting Championships meet that saw him reach some pretty crazy numbers. Most importantly though, as he explained on Instagram, he hit a 405kg (892.8lb) deadlift for a new all-time world record, en route to setting a second record for his 910kg overall total. These were his numbers from the event:

“The result of the performance at the World Championship🏆.
There is a lot of discontent in my head about the implementation, but in short, the hunt for numbers was a success.
The record deadlift of 405 kg also managed to close the all-time record in total – 910 kg✅ (in the video, the test approaches: squats 310 and 325, bench press 170 and 180, deadlift 380 and 405).”

That was quite the performance fro Nasonov, who had been trying to break his own record for a while. His prep for this contest saw him pushing himself in the training room to finally get through this barrier and reach the heights that he wound up achieving. Even as early as last month, he was pulling serious weight in training for the World Powerlifting Championships. Here he is a few weeks before the contest, pulling one of the fastest and smoothest 380kg deadlifts that you will ever see.

This was a very impressive performance from the still surprisingly young Dmitry Nasonov. He has been really amping things up lately, and it seems that he plans on continuing this trend in 2021. So far so good too, as he was able to finally break his own record and reach a new milestone that he had been working for.