At just 17 years old, powerlifter Malik Triolet establishes himself as a threat to the 82.5kg division with a massive 705kg total in competition 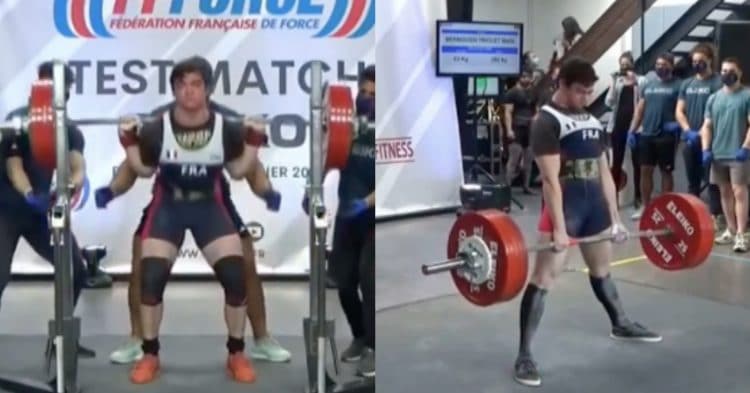 If the last few years, we have seen that the younger side of powerlifting has been booming in ways that are awe inspiring. Malik Triolet continued this trend recently, with a massive total to set an unofficial world record.

France has been developing some serious powerlifting talents, and Triolet is just the latest of these. Having competed since he was 14, he has been making quite the impression as a talented athlete.

That said, he took things to another level recently, when he competed at the Fédération Française de Force (FFForce) Test Match Eleiko event. Competing in the 16-17 year old, 87.5kg (193lb) division, he delivered on quite an incredible showing.

As seen in a video posted to Instagram, Malik Triolet had an epic trio of lifts that led to him landing an enormous 705kg (1554.3lb) total. Below are his lifts from this meet, as well as video of his performance.

“Quite happy overall with this performance and very happy to have been able to shoot the mythical 300kg bar.

There is still a lot of work to do but it is very encouraging for the future,” Triolet wrote on Instagram (translated via Google).

That performance was absolutely impressive, with each lift displaying his incredible growth. As he notes in the post, the 172.5kg bench and the 705kg total surpassed the world records for both lifts in the 87.5kg.

Unfortunately this did not count as an official IPF recognized record, due to the fact that this was an FFForce event, rather than an International Powerlifting Federation contest. Nevertheless, that takes nothing away from the insane accomplishment that he achieved.

Aside from the unofficial world records, which were awesome in their own right, it also displayed the amount of growth and improvement that Triolet  has been doing over the last few months. He surpassed his previous competition bests for each lift.

This improvement is a clear result of the work he has been putting in with his time at the gym. Here he is just a few months ago, where he hit a 380lb bench in training, matching his world record before he even did it in competition.

At just 17 years of age, it is clear that we have not seen anywhere near the best that Malik Triolet has to offer. There are quite a few promising talents on the younger side of the sport, and he has etched his name right alongside them.

Brooke Ence Transformation – Before and After CrossFit