As he continues to make leaps and bounds in his cardio training ahead of the Eddie Hall fight, Hafthor Bjornsson shows off his super lean physique 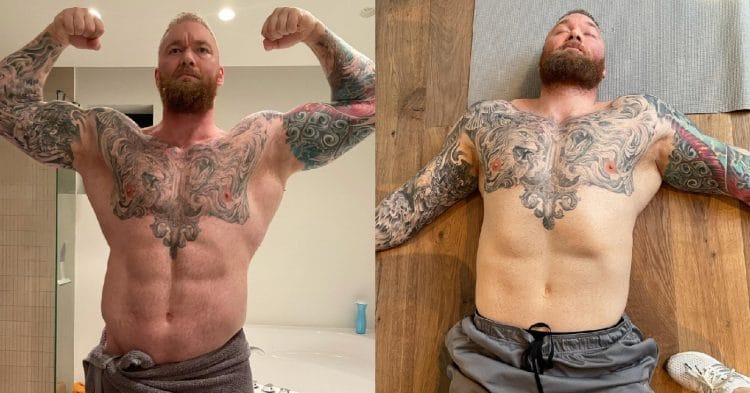 The weight loss that Hafthor Bjornsson continues to undergo never ceases to amaze and inspire his fans. He recently checked in on his weight, and The Mountain is looking leaner than we have never seen him.

As he has progressed through his boxing training, Bjornsson has been dropping bodyfat like a heavy bag of groceries. It seems like every time we see him, he is smaller than the last time, making it interesting to see how he will look in the ring.

We already got to see a glimpse of that when Thor took his first exhibition boxing match. It was not the longest fight, but all things considered, his cardio held up throughout the three 3-minute rounds that he competed in.

Hafthor Bjornsson gave an inside look into some of his cardio training with a recent post to his Instagram. Here, the Icelandic strongman could be seen jumping rope, one of the most classic examples of cardio training that you will see from someone learning to box.

That was not the only interesting thing that we were and to glean from this post. Not only was he doing double unders, which is impressive enough, but he also revealed that his weight is an astonishingly low 346lb (157kg).

“First time trying double unders. Body weight still 157kg. I’m getting in a better conditioning shape for sure. Few more months and I’ll be in the best overall shape I’ve been in my life for sure. 💪”

To be clear, this is not that much different than what Bjornsson weighed for his exhibition fight against Steven Ward. However it is about 80lb lighter than what he weighed when he scored a world record with his 501kg deadlift, just 9 months ago.

It is more than just how much weight he has lost too, there is also an element of how the weight is distributed. He shared a physique update a day earlier, which showed that his weight was distributed through lean muscle mass, with a clear decline in bodyfat.

It goes without saying that Hafthor Bjornsson is doing his best to keep his strength while increasing his cardio. There is still a question as to just how far that cardio will get him, but he plans on doing more exhibition fights before he meets Eddie Hall in September, so we will likely get the answers to those questions.

What do you think of this recent physique update from Thor?