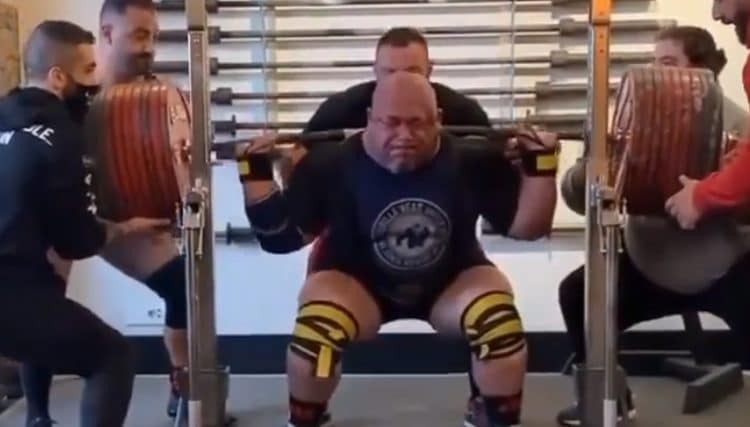 If you’re wondering what powerlifter Rabih Sakka of Lebanon thinks about in his spare time, it’s about not letting his fans and supporters down. His latest posts to Instagram are showing the world that he is spending Covid-19 comp downtime in training to enhance his squat performance.

And it’s working. His latest video was a 500kg/1,102lbs squat. Because it was Saturday?

Because Rabih Sakka is Awesome

Rabih Sakka’s training session posted yesterday with training at the Barbell House was a quiet one with few comments for his followers. It was all about the form with a massive lift.

In the squat, he is in a suit and wearing knee sleeves. The form looks effortless.

Noting his other posts on Instagram, you can see the love that Rabih has for his supporters. The training session he posted prior to this weekend was equally impressive.

That session was shown on December 3, where he performed a 510kg/1,124lb squat. Here he also performed in a suit with knee wraps. This monster lift he performed smoothly and again, it seemed effortless.

These are training sessions his competitors will have to take seriously. In his post on December 3, Rabih shared the crushing disappointment that has hit so many elite athletes this year.

Prior to the pandemic, he had been training to compete in Russia but wasn’t granted a visa due to Covid-19 restrictions. He said, “Powerlifting is life for me.”

Thanking his fans, he said that he is going to spend the time training. He just “decided” he would lift half a ton, and he succeeded. He also noted he was proving to his friends and fans that he is worthy of worldwide competition, and next time he is going to bring home the gold.

So i decided to lift 500kg and I succeeded then I decided to lift 510kg today and al hamdolellah i succeeded to prove to my self and to all of my friends and fans that I can compete worldwide and I promise you all that my next championship I will bring the gold medal 🥇 home.

In the October 18, 2019, Global Powerlifting Association Sakka took home the gold in the 308lb weight class with the following stats:

He is also listed on the United States Powerlifting Association page where his 1,014 lb squat is certified.

During this comp, his lifts were performed in a single-ply suit, the same as in his Instagram posts. His recent training sessions are just shy of Brian Carroll’s all-time world record of 592.3kg/1,306lb squat also performed with a suit.

We love what’s happening with Sakka here, and will follow his competitive spirit for you as he continues to dominate his weight class.