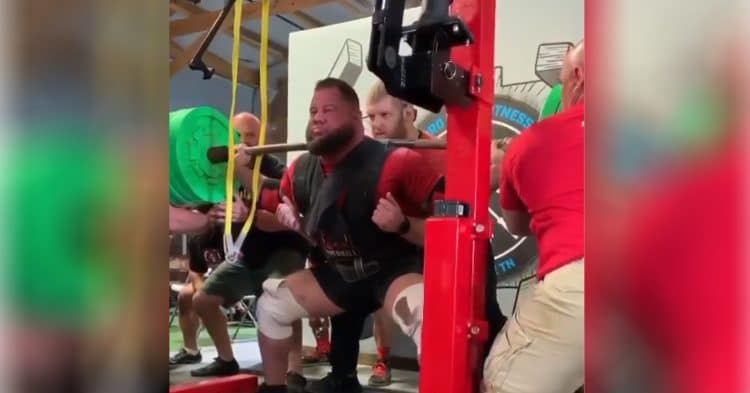 A horse, some vehicles, a grand piano, all things that weigh approximately the same amount of weight that Brian Carroll recently squatted at the Revolution Powerlifting Syndicate Gene Rychlak Jr. Pro Invitational on October 3. He squatted 592.3kgs/1,306lbs.

He is the first person in the world to ever do this (officially), and it occurred on his fourth attempt in the Pro class where 39-year-old Brian Carroll squatted wearing a multi-ply suit and knee wraps.

Some discussion on whether or not this was a legitimate squat has been reported, but the squat was ruled successful by a referee. The RPS rules for squat indicate that

“The lifter must bend the knees while lowering the body until the top thigh at the hip, NOT the hip joint, is lower than the top of the kneecap.”

The event occurred at the 2020 Gene Rychlak Jr. Pro Invitational in Tennessee. His first attempt was 1,281 lbs, still well within the horse and grand piano range of things that are that heavy. At 303lbs himself, he lifted four times his body weight in almost every attempt.

With over 10 years in powerlifting under his belt, along with a lengthy history of accomplishments, this world record is one he has been hoping to hit for some time. The record to beat prior to this competition was Nathan Baptist of the United Powerlifting Association who was the record-holder with 580kgs/1,278.68lbs.

Carroll beat the record this week by 12.39kgs/27.32lbs with this fourth attempt squat that was not included in his competition results. Still, he took home a third-place with his highest squat on record for the day of 581kgs/1,281lbs.

This, after suffering an injury a few weeks back, in a tear to the biceps tendon. That didn’t stop him, as injuries are not a stumbling block for Brian Carroll.

Even with a torn bicep tendon, he still attempted to hit the gym. But forcing a lift with the injury felt like he had been “zapped by a shock collar.” He is recovering from surgery for the injury that reportedly occurred on October 6.

During that session he talked about how important intuition is when you are digging deep to meet a big goal.

“Sometimes you listen to that inner voice and shut down, other times you push beyond and your body lets you know. But your instincts can be wrong, so when you figure this out let me know pls.”

Watching the squat in that session, it looks exactly like a shocking zap, and you can see it all over his face.

It’s not the first time he has pushed through an injury. In 2012, Brian Carroll suffered a back injury that included multiple fractures that led doctors to believe he would never recover.

He pushed through it, and you can see him doing the same thing here.

This attitude and intuition he has taken to not just lifting but inspiring others on how to do the same.

In addition to being a world-class powerlifting athlete, he also manages private and group coaching and has written a best-selling strength training book called 10/20/Life. He runs his own coaching sessions and his writing has been featured in multiple publications.