Previewing the Men's Physique Division of the 2020 Mr. Olympia, and predicting who will be in the top six of the event 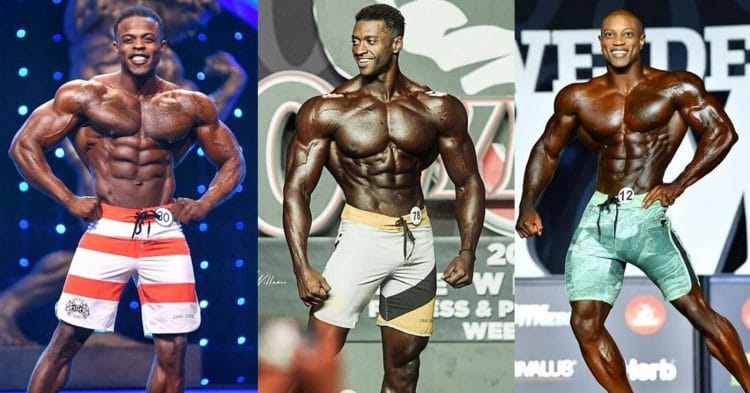 The 2020 Mr. Olympia has a lot of exciting storylines and important pieces to look forward to, but the Men’s Physique division has become a bit overlooked as a consequence. However we have things covered for you, as we take a look at the top six athletes heading into this contest, and potentially predict who will end up on top.

With things like the comeback of Phil Heath, the stacked Classic Physique division, and the return of the Ms. Olympia competition, it is completely understandable that the Men’s Physique division has gotten a bit overlooked. That being said, there is still a lot to look forward to with these athletes, as it continues to be one of the best divisions in all of bodybuilding. This division focuses almost exclusively on upper body, with board shorts being worn on stage, but this leads to some of the craziest and aesthetically pleasing physiques you will see.

A grand total of 35 athletes have qualified for the 2020 Men’s Physique Olympia, but only one can be crowned champion. Today we take a look at who we expect to place in the top six at the contest, and potentially who will win the contest.

Few Men’s Physique athletes properly demonstrate the definition of improvement as Steven Cao. He has been showing the type of consistent growth that is what you would expect to see from a future contender to the Olympia throne.

He was able to look solid at the Arnold Classic earlier this year, but really seemed to put things together at the Chicago Pro, when he earned a win and a ticket to the big show.

This division focuses a lot on symmetry, and Cao’s midsection is a clear example of that. This, paired with the broadness of his shoulders should comfortably place him in the top six. However if he continues on the path he is on, this should only improve as the years go on.

Turning pro in 2013, Ryan Terry is turning into a real veteran of the Men’s Physique division. He has scored as high as 2nd at the Olympia, and is an Arnold Classic champion. That being said, it seems that the momentum is not exactly in his favor, as he appears to be trending towards a downslope, in spite of a win at the Asia Grand Prix in 2019.

Ahead of the Olympia, Ryan has been showing the consistent training that we have come to expect from him, and he seems like he will be completely prepared for this showcase.

He regularly brings a clear separation in his pecs, as well as a clean v-taper to the stage, so these will certainly prove to be an advantage against some of the other people he will be facing. In the end, this should lead him to a fifth place position.

After coming in third place at both the Arnold Classic and Olympia in 2019, the future seems bright for Kyron Holden. This Men’s Physique competitor has been showing the signs of someone who is consistently improving, and this will likely continue on the big stage.

With it having been 13 months since his last contest, it is going to be interesting to see the changes he has made in this prep.

When you take a look at Kyron’s strengths, it is clear that he has some of the best separation in the entire division. He also has strong obliques, which will serve him well in the pre-judging rounds, which focus a lot on the quarter turn. We expect to see him round out the top four with his well rounded physique.

2018 Men’s Physique Olympia winner Brandon Hendrickson has been a veteran of the sport for nearly a decade. He is a consistent and strong competitor, who is ever far from the top of the division.

He has not placed outside of the top 5 in any contest he has participated in since 2015, and we can expect that streak to continue at the Olympia.

One of the reasons Hendrickson has been so competitive as long as he has been, is simply due to the fact that he is really well rounded. If you want to narrow things down to one specific area of strength, then it would be hard to argue with the idea that his pecs are his strongest attribute. Provided that nothing drastic happens, he should easily be in third place by the end of the Olympia Weekend.

Few Men’s Physique bodybuilders had as good of a year as Andre Ferguson. After being the runner up at the Olympia in 2019, he showed this was no fluke by winning both the Arnold Classic and Tampa Pro.

He may go by the nickname of the “Lucky Libra,” but his skills are clearly a product of hard work more than luck.

Ferguson will undoubtedly have one of the most complete packages when he steps on stage, with his best attributes being his midsection. The man’s obliques and abs are incredibly well defined and symmetrical, and this will be hard to top when he stands on stage with the rest of the competitors. The sole potential exception to this is our number one entry.

Reigning and defending Men’s Physique Olympia champ Raymont Edmonds has long been one of the most elite bodybuilders in the division. He finally ascended into the upper echelon with his win last year, but shows no signs of slowing down.

He seems to have the potential for a dominant reign, provided he continues to improve in the ways that he has to lead to this point.

When comparing him to Ferguson, Edmonds may be a tick below Andre in terms of the midsection. However he is leaps and bounds better when it comes to the upper torso, with his rounded chest and shoulders, as well as his proportional arms.

At the end of the day, he seems to have the more rounded physique of the two, and we expect a repeat of last year’s results.

There is nothing wrong with being excited for other divisions at the 2020 Mr. Olympia, but do not sleep on the Men’s Physique division. Things look good heading into the contest, and there should be a fun supply of action to satiate all of your bodybuilding needs. Rest assured that this year will deliver some exciting action from this division, and will be well worth watching.