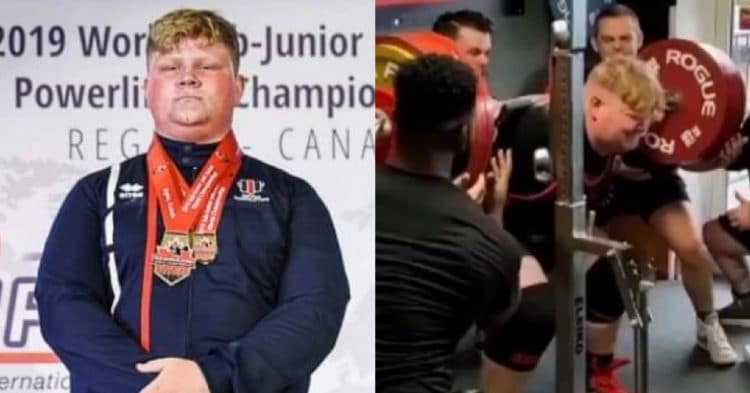 If there is anything that 2020 has shown us (besides the importance of stocking up toilet paper), it is that there is a plethora of young powerlifters rapidly rising through the ranks of the sport. You can add 18 year old Ray Bowring to that list, after he had an unbelievable mock meet recently.

Bowring is the son of a highly skilled powerlifter, Indian IPW World Champion Dean Bowring, and these skills have definetly passed down through genetics. Having started training at 13 years of age, Ray has already stamped his place among the best up and coming lifters, not just in the UK, but in the world generally. This has been proven by his already numerous wins as a junior Competitior, taking first at several European contests, as well as the IPF World Juniors & Sub-Juniors Championships, last August.

At this point, Ray Bowring is preparing for his next contest, the White Lights Media Championships meet, next month. Ahead of this, he posted a training update to his Instagram, of a mock meet in the gym. This crazy session saw him squat 360kg (793.6lb) for an unofficial European record, as well as landing two unofficial world records with a 325kg (716.5lb) deadlift and 871kg (1920lb) total.

This was some rather impressive work from Ray Bowring. He is oftentimes seen training with his father, who is regularly there to spot him and also help with his technique. You can see that here, with an intense squat session that took place a few days before this mock meet. The squat numbers he put up here, naturally led into the record-setting squats that he hit in the mock meet.

There are a long list of active young powerlifters who seem to be ushering in a new generation of skills into the sport. After these recent performances, and with the help of his father, it seems that Ray Bowring is fair to add to that list.