Larry Wheels Tests His Grip Strength By Attempting A Plate Curl, Gets Put To Shame By Khaled Jashell 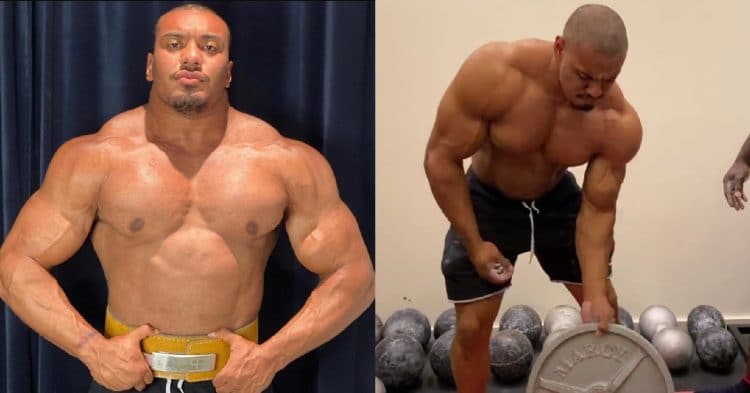 Someone like Larry Wheels does his best to test his strength to the max at every turn. However even he met his match when it came to doing a plate curl, courtesy of Khaled Jashell.

As the connoisseur of personal records, Wheels has been on the delivery end of some of the craziest and most wild performances of any athlete from his era. He already has a long list of accolades under his belt, with championship wins in powerlifting as well as some hefty records, both official and unofficial. In fact, as the brand new strict curl only event makes its way to the Arnold Sports Festival next year, he is considered by many to be the front-runner for winning this event and setting a new strict curl world record.

Time will tell if Larry Wheels is successful in this endeavor or not, but in the meantime he has been trying his hands at a new kind of challenge. We  mean that both figuratively and literally, as he put his grip strength to the test in a big way. Alongside Khaled Jashell, in a post he uploaded to Instagram, he attempts to curl a 45lb plate using just his grip. Somewhat surprisingly he barely moves the plate, but Jashell comes behind him to put him to shame by curling the plate like it is nothing.

“This guy has the worlds strongest grip! Try curling a 45/20 plate like this to test your grip!”

This guy has the worlds strongest grip! Try curling a 45/20 plate like this to test your grip! @khaled_jashell @teampersonalrecord • • Click link in bio for the best lifting gear, supplements, training programs, clothes and more!

It is safe to say that Wheels is right about Khaled Jashell having unreal grip strength, considering how hard Larry struggled compared to him. Of course, this does nothing to take away from the impressive strength that Larry has, which he has shown before. We recently wrote about him doing an unofficial world record 550lb incline dumbbell press, which is absolutely ridiculous. If you missed that, check it out below:

At the end of the day, Larry Wheels may not have gotten it done with the 45lb plate, but he is still is jaw-droppingly strong. If anything, this is more of a commentary on how difficult the plate curl is. Perhaps this will be the new trend among strength athletes.