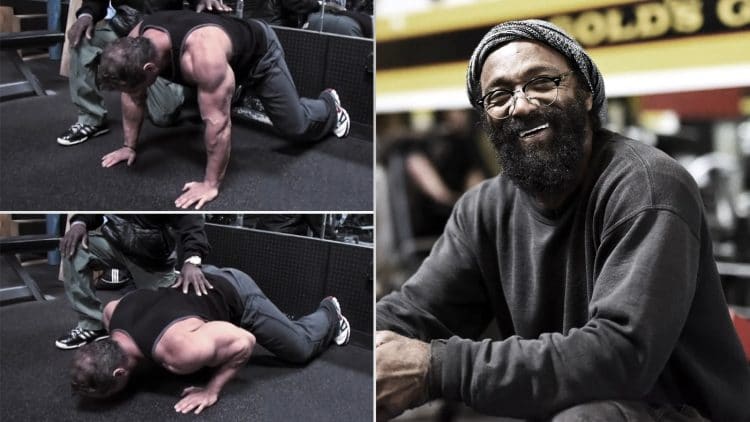 Retired professional bodybuilder and Mr. Olympia competitor Charles Glass recently shared a push-up variation on his YouTube channel which puts more pressure on chest muscles. One of the most effective exercises to build upper body strength, traditional push-ups work the pectoral muscles, shoulders, and triceps in the best possible way. The bodyweight exercise requires no equipment and can be performed anywhere without a proper setup, which makes it an effective tool in bodybuilding.

In a recent video uploaded on Charles Glass’s YouTube Channel, the retired bodybuilder stated that this variation of push-up puts more pressure on pectoral muscles. Glass then went on to guide his associates to demonstrate the variation.

Here is the step-by-step breakdown of Charles Glass’s push-up variation:

Kneel down and place the soles of your feet against the wall or any sturdy vertical surface.

Place your hands on the ground in front of you and assume the push-up position with the soles of your feet pressed against the wall. Knees have to be touching the ground at this stage.

Widen the stance till your knees are further apart than the shoulder width. Lift your knees slightly off the ground.

Make sure that your hands are placed at shoulder-width apart

Perform the push-up without letting your knees touch the ground.

Courtesy of Charles Glass YouTube Channel, You can watch the video below.

Charles Glass advises making sure it is the chest that comes to the ground while performing the rep and not the head. However, the neck has to be kept in a neutral position.

After demonstrating a set of this push-up variation, both of Charles Glass’s associates admitted that it was a lot harder than the traditional push-up. Gass then explained how the foot placement and form makes chest muscles work more:

“You can tell the difference. Your body is not stretched out. You’ve got everything compressed into the wall and you’re going over your hands. That really kills your chest because you can’t use anything but muscle to push off. So it works really well.”

Charles Glass stated that his philosophy is to make sure that the entire pectoral muscle group is put to work while performing the exercise. Glass then suggested avoiding a complete lock-out of the elbows while doing the push-up but he advised to make sure you don’t cheat with a half-rep.

To get the most out of this push-up, Charles Glass suggested three sets to failure for beginners. People with an intermediate level of fitness can perform four sets. Those at the advanced level can pump in five or higher but not without a proper warm-up session.