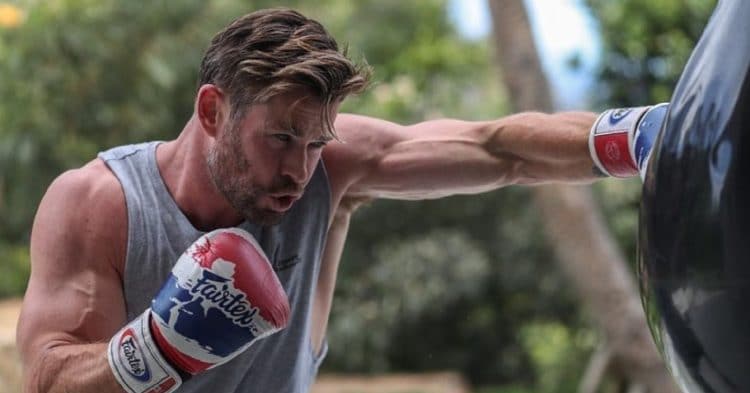 It may only be on the big screen that Chris Hemsworth has the powers of the god of thunder, but he has some thunderous arms in real life. He put those on display recent, and it has left fans in shock.

As well as being one of the most in demand actors in the world, Hemsworth is known for a being a fitness buff, always staying in top contrition m condition. He regularly shares his intense workout routines, as well as the results of all that work, and it has made fans jealous and intrigued for years.

He was back at it again, this running though a High Intensity Interval workout, thanks to the fitness app named Centrfit, and posting about it in his Instagram. Here the Kiwi superstar can be seen hitting a heavy bag while showing off just how massive and shredded his arms are, especially after the last few weeks.

“Punching my way through jet lag thanks to @centrfit with some High Intensity Training. Nothing gets you over a long trip like a punchy workout. 📷” Hemsworth wrote.

Considering the fact that he seems to be chiseled at all times, it is easy to believe that Chris Hemsworth never strays from the strict diet he must be on to get those kinds of results. However, most people like to enjoy a cheat meal every once in a while, and he is certainly no exception.

His most recent chat day came when he arrived in Los Angeles recently, and decided to hit up a pizza place and grab a slice. Okay, maybe it was more than a slice, as he could be seen going to town on pizza and wings, eating what he was coyly referring to as a light and healthy cheat meal, but was actually clearly anything but.

It is absolutely and totally inspiring see Chris Hemsworth taking his physical fitness so seriously on one hand, but on the other he shows a side of his humanity by enjoying the same type of cheat meal that others enjoy, albeit a bit bigger. He is currently starting to work on the second Extraction after the first found major success on streaming services, so it will be exciting see how he looks in the movie.

Flex Lewis Will Show ‘Something F—king Special’ Onstage In 2022