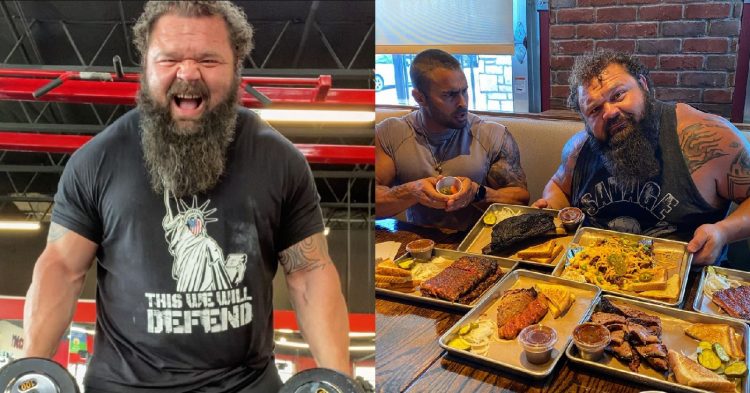 In this would there are two things you can always count on: death and strongman athletes loving to eat (or whatever Benjamin Franklin said). Robert Oberst showed this in a big way recently, when he had the most insane cheat meal ever.

Every single athlete’s favorite day of the week is cheat day. People who spend every day on strict diet plans love to have a day where they can relax a bit. Even though elite strongman may not look like they care the most about their diets, they too keep a close eye on what goes in their bodies, so they are also always excited when they can have whatever they want.

Fan-favorite strongman Robert Oberst decided he would take his cheat day to a new level, with a recent video to his YouTube channel. Alongside IFBB Physique Bodybuilder Jason Poston, Rob went to Tender Smokehouse BBQ to have a cheat meal that was large enough to make a grown man cry. By the end of it all, the two-time finalist at the World’s Strongest Man would down around 12,000 calories.

With a spread that filled the table, Oberst and Poston first started off with a Frito Pie, consisting of mac and cheese, brisket, jalapenos, sour cream, and Texas toast, all on a bag of Fritos. For most of the meal, the video is sped through. However they work their way through beef ribs, pork ribs, brisket, chicken, and banana pudding. All in all, Robert says it was around eight pounds of meat.

“Well, all good things must come to an end guys,” Oberst said with clear disappointment as he finished the meal.

After the video cut back in to show little remaining but bones and scraps, Oberst and Poston joke about how much protein they ate. Jason notes that he is a type 1 diabetic, so he was required to watch his macros and adjust his insulin accordingly. However he speculated that Rob likely ate around 200g of protein in this meal, with 100g of that coming from the one massive rib alone.

You can watch the full video for yourself, and take in exactly how much Robert Oberst and Jason Poston ate in this meal. They may have to work extra hard in their next training sessions, but if they this was not the case, did they even do chest day right?