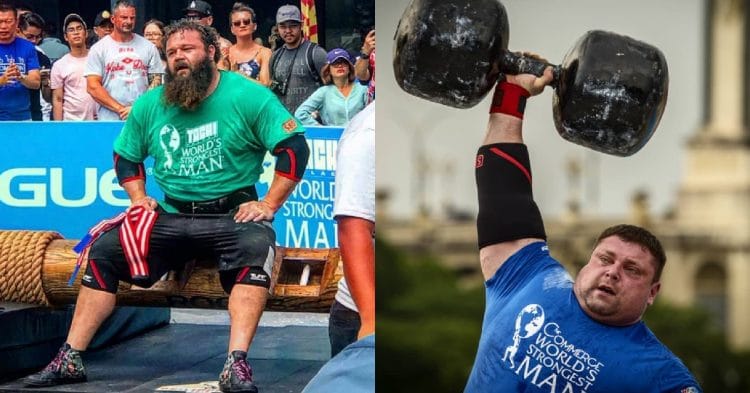 Thor Bjornsson has been causing some controversy in the strongman world lately, with his plans to attempt a 501kg deadlift. Now two of the most respected figures in strongman, Robert Oberst and Zydrunas Savickas have spoken out about their thoughts on this lift.

Bjornsson is making an attempt at the heaviest deadlift ever, at 501kg. However this is controversial, as he plans to attempt it in a non-competitive setting. Initially he planned to do it at the World’s Ultimate Strongman event, but with the global health crisis stopping that contest from happening, he has decided to make the attempt via live stream, with an official there to verify everything. This has caused backlash from many in the community, most notably Eddie Hall, who questioned the validity of this as a world record.

As a longtime strongman veteran, and elite competitor, Robert Oberst is a respected figure in the strongman world. Therefore many people asked his thoughts on Thor’s attempt at this world record. He posted to YouTube, where he addresses the situation and gave his opinion on the matter.

“I have to admit, when I first got the letter and everything, I was excited. I was like ‘Oh that’s awesome, we’re all on lockdown it would be great to have something to watch.’ I was excited at first. Of course, Magnus is the referee, and if there is a referee I would trust, it’s him.

“I totally get where Thor’s coming from, I totally get that. You’ve busted your ass and then they snatched up World’s Ultimate Strongman, they snatched up World’s Strongest Man, and then it’s just gone. That’s just not happening right now, we don’t have any guarantees that we are going to actually get to do these things. So I understand that you’ve busted your ass and you want to work. I understand that, but it’s different. In strongman, when I was chasing records, there was always a discussion as to what log we were going to use, as to what weights we were going to jump. All these things affect you when you’re pressing.”

Oberst went on to explain that it is not about simply lifting heavy. It is also important to beat the people you are competing against, too. That is what makes setting records so impressive, and that is why he feels the record needs to be broken in competition.

Someone who feels the same as Robert Oberst, is Big Z, Zydrunas Savickas. Big Z knows a thing or two about setting records, as he holds several in strongman competition. He also gave his thoughts about Thor Bjornsson in a YouTube video. His shares a similar sentiment as others who have spoken up.

“Official strongman records can only be set in competitions. Like in any other sports, it’s nothing different from running or jumping. But strongman sport is a more difficult situation, because we don’t have an international strongman federation with strict rules about records. We have so many strongman organizations who put on strongman competitions around the world.”

Big Z goes on to explain that every organization has the right to have their own rules. However everyone must agree on the rules for setting world records, so each record is standard around the world. Otherwise, there is no way to maintain those records, with many different variations. So he believes Thor should have to complete the record in competition.

Wherever you sit on this issue, it is important to note that rivals such as Robert Oberst and Big Z are more prone to be against things like this. Regardless, there is no easy answer here, and both sides have valid points.