Eddie Hall Fires Back At Thor Bjornsson, Apologizes For Comments About Icelandic Officials 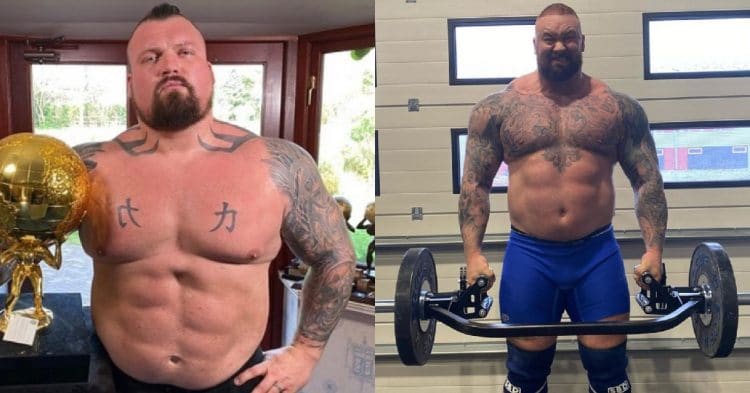 Eddie Hall and Thor Bjornsson are having a bit of a disagreement right now, to say the least. Now “The Beast” has taken things to a new level, tearing into the Icelandic strongman.

Bjornsson is currently looking to hit a world record 501kg deadlift, a record currently held by Hall. Initially his plan was to attempt this record at the World’s Ultimate Strongman contest later this year. However, when this was derailed by the current global health crisis, Thor looked to attempt the record in a gym setting, with a ton of precautions in place to verify that he was properly lifting the 501kg.

Eddie Hall however, does not feel like this is acceptable. He tore into Thor, saying that he would not credit the Icelandic champion with the record if it were not hit in a competitive setting. Moreover, the two have gone back and forth, with Thor accusing Eddie of cheating at the 2017 WSM, and Eddie expressing trust issues with the Icelandic officials.

Now Hall has walked back some of his statements about Iceland. In a lengthy Instagram post, he apologized for his words, saying that he was speaking in the heat of the moment, and out of turn. However he then doubled down on his criticisms of Bjornsson, questioning his character and competitive nature.

” ‼️PRESS RELEASE ‼️
Firstly & most importantly, I would like to apologise for my comment in a live Youtube Q&A where I said I didn’t trust the Icelandics; LINK IN BIO↖️ a very poor choice of words when put on the spot. In reality this couldn’t be further from the truth, I was specifically referring to Thor & his entourage that accompany him to every competition. You’ll not see this from the public’s perspective or on TV, but their attitude & behaviour is generally intimidation & bullying if even the smallest thing doesn’t go Thor’s way. Talk about unsportsmanlike like and unprofessional behaviour, you’ve got it right here.
•
At WSM 2017 Thor would not accept a certain referees decision on a certain event (Swipe left). He called into disrepute the judging skills of a referee which was then looked at by 3 referees & the decision was given to the legend that is Magnus Ver Magnusson who stood his ground and has since been appointed head referee at WSM, but now Thor will take his word as golden to be the judge at his 501kg deadlift attempt, talk about hypocrisy? He’ll drag his name through mud or place it upon a pedestal to suit his objective.
•
Because of the malicious rumours Thor & his team started I’ve endured years of people questioning what is the crowning achievement of my career. Well guess what pal, you break my record in your home gym with a bunch of your pals, you’re going to get the same treatment.
•
Absolutely no legitimate sport would acknowledge World Records broken out of competition & you are undermining the very sport you are claiming to champion.
•
I genuinely look forward to having my record broken & seeing what is possible. I think you are probably the man to do it, there’s no denying that & I’ll still shake your hand afterwards and say well done… if you do it under the appropriate conditions. For the record I feel the same way about the other “records” that are being attempted, it just doesn’t feel right & there are 1000s of strength fans & athletes that feel the same way.
•
Break a record in a comp where other people can contest it & no one will have a negative word to say, including myself.”

Eddie Hall tackles several things in this statement, from Thor Bjornsson’s inconsistent feelings about the referee he will use to judge the 501kg lift, to the rumors that Thor apparently started about Eddie cheating. It is another intense chapter of a bitter rivalry that will seemingly never end.