Roelly Winklaar Shares Throwback Photo From When He Was 18, And He Is Unrecognizable 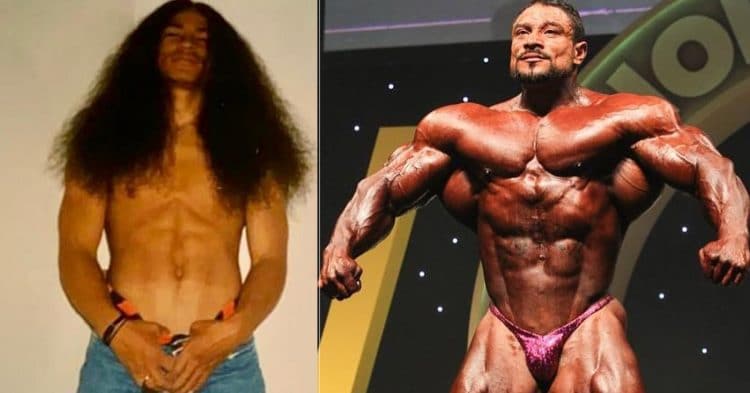 Nowadays most people know Roelly Winklaar as a gigantic bodybuilder with a ton of skill. However he reminded us recently that this was not always the case, by sharing a throwback photo showing just how far he has come.

The career of Winklaar has been long and extensive career, competing in virtually every major event at some point or another. Although he does not hold any Olympia wins at this point, he did get crowned the People’s Champ in 2018, after scoring 3rd place at the event. Even his last contest saw him victorious, at the 2019 Yamamoto Pro, where he made a quick turnaround after a disappointing 5th place at the Olympia. Regardless of whether he wins or loses, every time he steps on stage he is a feared competitor, and could easily beat anybody on his best day.

However things were not always like this for Roelly Winklaar. In fact, like everyone else, he had to work very hard to get the physique that he has used to win multiple contests. He actually reflected on this recently, with a post to his Instagram. This Throwback Thursday photo sees an 18 year old Winklaar, who knew nothing about bodybuilding, but was still athletic from his days a soccer player. To say that he is unrecognizable from the way he looks today is an understatement.

“Here’s a major throwback. Back when I was 18 and living in the Netherlands. I was a soccer player then. And didn’t know much of bodybuilding. I wish I looked like @brandon__curry though when he was 18 🤪
.
How times have changed and how things have changed since then 🙏🏾”

This man looks absolutely nothing like the Roelly Winklaar that we have all come to know and love, and it is not just because of the luscious mane on top of his head. While there is clearly some natural athleticism that he has, which can be seen here, his physique is far more slim and lanky like a typical soccer player. It is clear that he had to spend some seriously long hours in the gym, bulking up and becoming the man who walks the stage today.

It has been a long road for Roelly Winklaar, in order for him to get here. The way these top athletes can transform their bodies into what they want them to be is simply inspiring. It reminds fans that anything is possible with the right amount of drive and determination.