Ronnie Coleman says the award speech was "the hardest thing I had to do in my whole life" at the 2021 Arnold Classic. 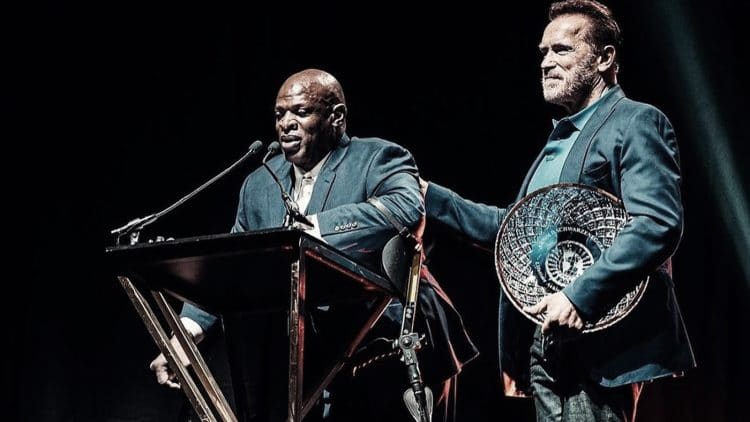 Eight-time Mr. Olympia winner Ronnie Coleman recently shared his thoughts on his emotional speech at the Arnold Classic lifetime achievement award ceremony. During the recent issue of Nothing But A Podcast on his YouTube channel, Ronnie Coleman spoke about what went through his mind during the emotional speech at the 2021 Arnold Classic, that immediately went viral on the internet at the time.

In September 2021, Ronnie Coleman received the prestigious Arnold Classic lifetime achievement award for his contribution to the sport of bodybuilding. Ronnie is best known for winning the Mr. Olympia title eight consecutive times from 1998 to 2005. Tied for most Mr. Olympia wins to his name along with Lee Haney, Ronnie is widely regarded as the greatest bodybuilder of all time. The Arnold Classic lifetime achievement award made him the latest addition to the list of honorees that includes names like Robert Goldman, Sylvester Stallone, and Triple H to name a few.

Ronnie Coleman explains what the entire experience meant to him

As if receiving a lifetime achievement award was not enough, Ronnie received it from Arnold Schwarzenegger, who he hails as his idol and the greatest bodybuilder of all time. When it was time to say a few words about this honor, Ronnie was overrun with emotions while remembering his late mother and managed to complete the speech with great effort. An overwhelmed Ronnie Coleman was one of the most iconic visuals of 2021 and he expressed his thoughts on the same.

“It was almost like winning the Olympia, in a way.”

“I haven’t won a lot of wars, you know. I have had a few here and there but lifetime achievement and then being presented by Arnold (Schwarzenegger) also… somebody you look up to, idolize in a way… it was a quite blood reaching experience…” Ronnie Coleman said.

Ronnie Coleman’s mother was instrumental in his successful bodybuilding career and stood by his side during the highs and lows of his career. Her unfortunate passing in 2017 stripped Ronnie of the pleasure of accepting the lifetime achievement award in her presence.

“The fact that my mom wasn’t there to see it and she always made the big events that I was involved in… that made it even more gut-wrenching. So it was quite an experience… I’ll say it was a very overwhelming experience,” Ronnie Coleman continued.

Becoming one of the greatest bodybuilders of all time might seem like the most difficult thing in Ronnie Coleman’s life but that was not the case. The video of Ronnie Coleman’s emotional speech at the award ceremony went immediately viral on the internet. Ronnie stated that he had thoroughly prepared for the speech but could not bring himself to say the words. However, with great efforts, he managed to put everything out for everyone to hear. He asserted that it was the most difficult thing that he did in his life.

“Especially when I couldn’t get the last part out, it was the hardest thing I ever had to do in my whole life. I’m up there trying to give a speech and I knew what I had to say. But I couldn’t get it out because I was so emotional.”

“When I was practicing in my head, it went through smoothly. And then I got up there in front of all those people, then I started thinking about it I think that’s what really got to me, I really started thinking about it. It just hit me like a ton of bricks. I’m like, man! I’m not gonna be able to say this. But I had it made up in my mind… If I had to stand there for ten minutes to get it out, I was gonna do that! So that’s why I just stood there, tried to wait till it passed over me,” Ronnie Coleman said.

Ronnie Coleman joked that his emotions on stage were ‘almost too authentic’. He went on to further elaborate further on what made it so difficult for him to finish the speech.

“When you rehearse something, you rehearse it so it’s easy. You’re just by yourself and you’re not thinking about it because you’re rehearsing it, you know. But once you get up there and all those people in front of you and then you get caught up in the moment… It can be very very overwhelming. It was very overwhelming for me, at least.”

Ronnie agreed that it would have been a whole lot easier if he chose to read the script. Considering the entire emotional struggle he went through during the speech, Ronnie Coleman indeed managed to give a memorable speech on a very special day of his life.