The bodybuilding icon and 8x Mr. Olympia Ronnie Coleman was presented with the prestigious Lifetime Achievement award for his impact in the industry. 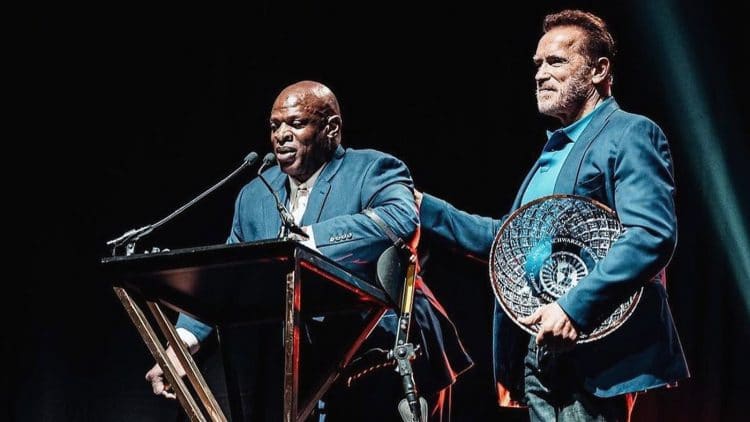 The 2021 Arnold Classic on Saturday, September 25, was electric with many athletes and fans in attendance. While competitors got their chance to shine at this prestigious multi-sport event, so did eight-time Mr. Olympia Ronnie Coleman who was presented with the prestigious Lifetime Achievement award… “Yeahhh buddyyy!!!”

Every year at the event, the legend Arnold Schwarzenegger presents the award to a very special individual to honor their incredible contributions to the community as well as their accomplishments.

Well, it’s hard to think of anyone more deserving than the iconic Ronnie Coleman.

Coleman is tied with fellow legend Lee Haney (Received the Arnold Classic Lifetime Achievement Award in 2006) for the most Olympia wins in Men’s Open competition history and is widely regarded as the greatest Open bodybuilder of all time.

His size, freakiness, and conditioning were unmatched and something of another planet.

Before his speech, Coleman shouted out the famous words “Yeah buddy” and “Lightweight,” of which he’d yell out in the gym to pump himself up before lifting “heavy ass weight”.

He followed up by praising 7x Mr. Olympia Arnold Schwarzenegger for his amazing bodybuilding career and then thanked his wife Susan and their kids for being so supportive. Can’t forget mom either, who would cook all of his meals, and according to the big man, “It was the best food in the world“. For those who don’t know, his mother passed a few years ago so it was a very emotional moment.

Coleman admitted that he couldn’t have been a successful bodybuilder without his family, and made it clear that bodybuilding is not an individual sport like many might think.

It was an extremely emotional moment for Ronnie Coleman to receive the Lifetime Achievement Award, admitting that he used to say he’d be up there one day. Well, his dream came true.

“I had seen Arnold give this award to other people over the years, and I thought to myself, ‘I’m going to get that someday.

“Here I am best here I am getting the greatest reward of my life.”

He broke down in tears and there probably wasn’t a dry eye in the building. After taking a moment to collect himself, the legend ended with…

“This is one of the greatest honors of my life.” Coleman said. “Momma, we got us a lifetime achievement award.”

The Louisiana native served as a police officer in Arlington Texas for many years and while he was a competitive bodybuilder. He left the police force in 2003 and retired from competition in 2007.

Coleman had to undergo multiple back surgeries following his bodybuilding career. However and unfortunately, it’s left him without the ability to walk as normal.

But that’s not stopped him from training and maintaining the dedication to keep himself in the best shape possible. Ronnie “King” Coleman was an exceptional talent and he’s an amazing human being and we wish him all the best in life.

Tom Brady Diet and Workout Plan For An NFL-Ready Physique