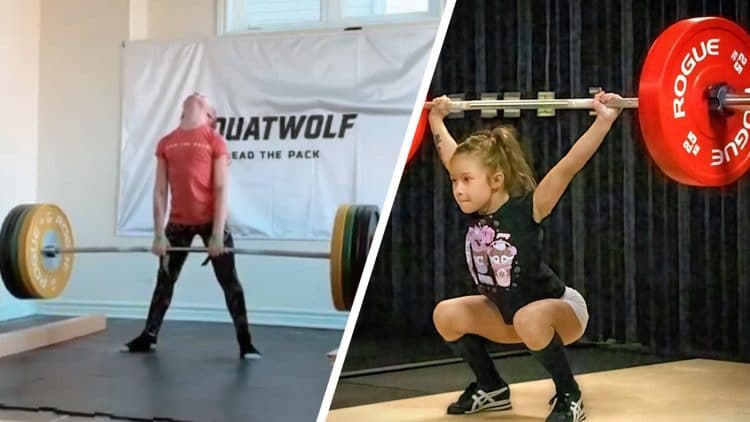 8-year-old weightlifter Rory Van Ulft started training shortly after her fifth birthday. She then went on to become the USA Weightlifting Youth National Champion in the 30kg weight class in both under-11 and under-13 division at age seven. The defending champion has attempted several heavy lifts and even succeeded in completing a 90kg deadlift in Sept. 2021. The lift was nearly 3.1 times her bodyweight which makes it even more impressive. Fast forward to Nov. 11th, Rory Van Ulft rack pulled 103kg on a barbell during a training session!

Van Ulft recently posted a series of videos on her Instagram story. The videos show her lift incrementally heavy weights as she rack pulled 100kg, 102kg, and 103kg with flawless technique. You can watch the 103kg lift reposted on Fitness Volt’s Instagram here:

Van Ulft’s powerlifting achievements are impressive, to say the least. However, gymnastics, not powerlifting is her first preference.

Fitness Volt recently sat down with Rory Van Ulft and her parents for an exclusive interview. Van Ulft’s parents told Fitness Volt that getting stronger in the lead-up to a competitive gymnastics tryout was the primary reason she got into strength sports (weightlifting and then powerlifting).

“That’s still the main reason why I lift—to get stronger for gymnastics.” Rory Van Ulft’s parents said on her behalf.

Rory Van Ulft won her first gymnastics medal in a local competition a few months back. Following the victory, she told her parents that she likes gymnastics more as it does not involve lifting weights over her head.

“Most of my weekly training hours are spent in gymnastics. I spend 9 hours a week at the gymnastics gym and 3 hours with my weightlifting coach. In addition, I lift at home another 2-6 hours per week, depending on the season spring and fall I lift more to prepare for meets, winter I lift less around gymnastics competitions, and summer I spend fewer hours in both sports.” Rory’s parents told on her behalf.

Most of us struggle to maintain discipline when it comes to following a strict diet. The problem gets worse when discipline has to be instilled in children. While most of us would naturally wonder how this 8-year-old girl adheres to an athlete’s Spartan life, her parents have kept things incredibly simple in this aspect. Rory Van Ulft pretty much consumes the same food that her family and friends eat. However, the only difference is:

“The only thing I do differently than other kids my age is that I always try to finish all of my protein at every meal.” Rory Van Ulft’s parents said on her behalf.

Rory Van Ulft does benefit from the flexible school program that allows her to accommodate sports activities. However, the 8-year-old powerlifter respects freedom and tries to maintain the balance between her studies and sports training.

“Whenever possible I also try to get homework done during recess or when I’m traveling to and from my sports.” Rory Van Ulft’s parents said on her behalf.

Rory Van Ulft’s next weightlifting competition is the Ontario Youth and Junior Championships on December 4. She will try to defend her titles in the youth 40kg and Junior 45kg weight categories at the event. Her parents told fitness volt that the 8-year-old will take a break from competition after that. Rory plans to focus on powerlifting during the time off.

When someone has set themselves on the path to achieving greatness at such an early age, it is natural for us to wonder how far they intend to go. However, Rory Van Ulft is not burdening herself with long-term goals. Instead, she is solely focused on becoming the better version of herself every single day. When Fitness Volt asked Rory Van Ulft’s parents what their daughter’s long-term goals are, they voiced their daughter’s thoughts candidly:

“This summer I watched Kuinini Manumua, one of my teammates on my US weightlifting team (Team Divergent), compete at the Tokyo Olympics, which has inspired me to want to follow in her footsteps one day. But at the moment I don’t have any real long-term goals in strength sports. My coach always tells me to take things one day at a time, one lift at a time. So, that’s what I try to do.”

After having a candid conversation with Rory Van Ulft and her parents, we believe that her long-term goals take second place in the grand scheme of things. What matters is that Rory has mastered discipline and commitment to her craft.