Seven year old Rory van Ulft says that she clears her mind to deadlift 80kg, earning the nickname of the 'Strongest Girl In The World' 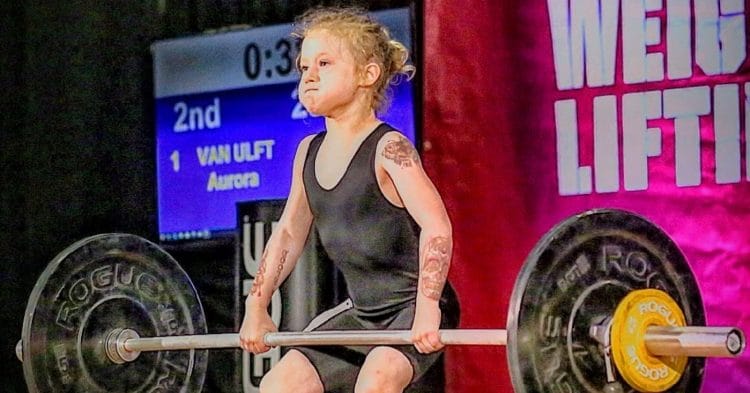 A four-foot tall Rory van Ulft from Ottowa revealed that she clears her mind when she wants to lift 80kg. She started lifting weights during her gymnastic class, after her fifth birthday. Now she is the current Youth National Champion in the USA Weightlifting 30kg weight class, for both the under-11 and under-13 divisions.

Cavan, Rory’s father, indicated that it’d be reasonable to suggest that her daughter is the world’s strongest little girl.

Cavan explained further that her safety is their priority as he maintained that the strange hobby is not dangerous for his daughter. Rory has been making significant progress with training for both weightlifting and gymnastics.

However, Rory’s first and foremost perspective is that of a gymnast, training this for nine hours every week, compared to the four she spends training weightlifting. After a local competition victory, where she earned her first gymnastic medal, Rory explained to her parents: “I prefer gymnastics to weightlifting because I don’t have to lift anything over my head.”

Using the Olympic women’s bar, Rory can jerk 42kg and snatch 32kg. She can also deadlift 80kg and squat 61kg. As Rory put it: “I like getting stronger. Being stronger lets me do more and get better at everything I try.”

The schoolgirl doesn’t believe in what will come before or after her competition. She explains: “I don’t think about anything. I just clear my mind and do it.”

Why Her Father Believes in Her

Cavan believes there is currently no one better at competing in the entire national championships among the lowest girls’ weight categories and developmental age which vary from one country to another.

During a trip to Disneyland last year for her show, little Rory got temporary tattoos. She then had young fans who recognized her flocking around her due to the phony ink. As Rory stated: “I wear tattoos because I like them. I think they are cool.”

Essentially, the International Weightlifting Federation uses Sinclair coefficients to measure pound-for-pound strength. As such, every bodyweight athlete can get the best lifter award when they have the highest Sinclair total. With the sum of 213.738, Rory appears the States’ best lifter for pound-for-pound 11-and-under.

Also, in the 40kg weight class, Rory is currently under 17 provincial champion for Ontario Weightlifting Association. However, Rory competes in the US since Canada has no Olympic-class lifting for youth national champion. Besides, Rory explained: “I like when I make a new weight that I’ve never done before. I feel proud of myself.”

Since she is so young, Rory van Ulft and her parents indicate no current ambition regarding Olympic. Rory says “That sort of thing doesn’t really matter to me.”

Sandra Handy is a freelance writer and she has been working as a freelance writer on a contract basis since graduation in 2009. She has been able to enhance and maintain her writing skills over these years, giving her a concession for gaining the craft of writing across so many platforms. Sandra will appreciate the prospect of working as part of a vibrant group where she hopes to make a remarkable input while building her talent yet further.