Kali Muscle provides an update in the aftermath of having a heart attack, and reveals what led to this 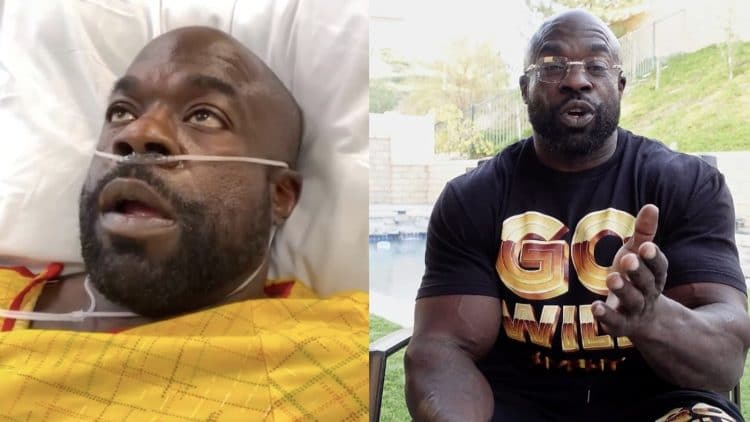 Fitness influencer Kali Muscle recently went through a serious health scare, being hospitalized after having a heart attack. Now he gives an update on his health since then, and explains what led to this happening.

Muscle is known for being an over-the-top, extremely muscular guy with an inspiring life story that involves prison. While he may be a bit of a hot head at times, he is largely known for being able to do some crazy feats of strength, and for just being massive.

Recently, Kali had a heart attack that left him in the hospital, around the same time that Shawn Rhoden died from a reportedly similar issue. Following this, he took to his YouTube to provide an update on the aftermath, and it starts with an electric vest that he has to wear every day, that records data on his heart health.

“I gotta wear this all day. The only time I don’t wear it is in the shower. This is all new to me, man. I never would’ve expected to go through something like this. I never took it for granted either,” Muscle said.

What Caused The Heart Attack

Kali Muscle then sat down and broke down what he believes led to him having a heart attack. He says that there are two main factors, and it started with his fourth stint in prison, when he decided to try to use steroids.

He said that he was always able to be jacked without using steroids. Yet after seeing people like Ronnie Coleman, Jay Cutler, and Flex Wheeler having nice houses and cars, he decided to give bodybuilding a try.

“I knew I was too old for football or professional sports, so I was like, let me try that then. Doing research on roids and all that, found a few people that could hook me up, so I start testing the waters. I had bought all the books, every day I used to Google 8 hours a day,” Muscle said.

Kali then was able to win his first few bodybuilding shows, and felt that he was doing pretty well, so he would keep going. Then, when approaching a bodybuilding guru about what steps he needs to make moving forward, he was instantly turned off by the list of steroids they said he needed to take.

“I said, this sport is not for me. I was still concerned about my health. I was up in age, 36 years old. At that point, I knew there wasn’t a lot of money in bodybuilding. Actually there’s no money, just being honest. It’s going to hurt some feelings, but it’s the truth. Y’all know. That’s why you need someone to sponsor you, because you’re broke,” Muscle said.

At that point, he stopped taking so many steroids, and backed down to what he considered to be a reasonable amount of testosterone. However, when he decided he wanted to have kids, he found out that he still used so much testosterone that his sperm count was zero, so he stopped using any gear and lost size, but got his count up and was able to have kids.

Kali Muscle made it clear that he feels like a combination of his steroid use over the years, and the fact that he was eating prison food for so long as a youth, led to him having plaque build-up in his arteries. He also said that there were warning signs that he ignored, even when doctors tried to warn him of possible issues.

“I got a physical, and the doctors were mentioning some stuff about kidney off, heart beat, my blood pressure was always high since I was a kid, blood pressure. I ignored it. I was a pessimist with the doctors, conspiracy theorist with the hospitals, all that stuff. So I was like ‘Oh they just want my money. I’m looking healthy and they’re jealous. They’re always trying to find something wrong with me.’ They was always telling the truth, I would ignore it,” he said.

Between this and the fact that he always had painful swelling in the feet and ankles, he said that there were a lot of warnings that he ignored. Ultimately it led to him having a heart attack, nearly killing him.

“The cause of the heart attack: plaque build-up in that artery, that main artery. It can take 10-20 years to happen, which for me, makes sense. When I was a kid, went to prison at 19, eating all that crap food. Then, compounding it years later, with juice.”

The main point that Kali Muscle is trying to make here, is that he had plenty of warning signs that he was on a path towards destruction, only to ignore them. He knows that this is even more common amongst the bodybuilding world, with athletes routinely putting off their health because of competition, or fear, or whatever it is.

If there is one takeaway that he wants from this video, it is that Kali does not people to do what he did, and ignore the warning signs. He issued a warning to any bodybuilders that may be watching.

“I hope you all learn from this. All the bodybuilders out there, my advice, get checked. When you get checked, what they tell you, go get it done. Ain’t nobody talk to us like how I’m talking to us right now. You’re a bodybuilder, if you’ve been on juice, three, four, five years, boy… I’ll tell you, I took pride in saying I took the stuff possible, and y’all taking… boy I’m telling you. Go get that physical, get checked out,” Muscle said.

To close, Kali Muscle paid his respects to the recent deaths in the sport of bodybuilding, like Shawn Rhoden, George Peterson, and John Meadows, among many others. He says that the most important thing to do is keep track of your health and listen to your doctors, to avoid situations like his.