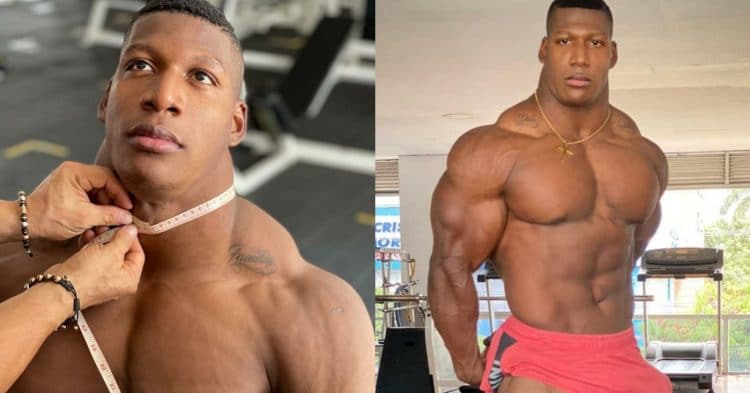 In itself, the neck is not something that an athlete specifically trains. However if you look at Columbian bodybuilder Rubiel Mosquera, you would think that he focuses almost entirely on that portion of his body.

Competing in the IFBB Elite Pro League, Mosquera has a pretty solid physique, with good size and a balanced physique. However that is not the reason why he is gaining popularity or going viral on the internet.

The reason that people recognize Rubiel is because of his ridiculous neck. He is being regarded as the new “Neckzilla” and that is simply due to the enormous muscle that holds his head up.

Looking at him, Rubiel Mosquera looks like his traps just stretch all the way up to his jawline. However upon closer inspection, it is clear that the neck is there, it is just incredibly thick and bulked up.

In fact, in a recent update that he posted to Instagram, he measured his neck, while asking fans to guess how thick it truly is. If you zoom in on the picture, you can see that around its thickest point, his neck is measuring at roughly 52cm (20.5in), which is absolutely insane to think about.

“How much do you think my neck measures?” Mosquera said (translated via Google).

The thickness on his neck is beyond belief. It makes one wonder if it can hamper his performance onstage, with it causing too much of a distraction with the judges or spectators watching.

Truth be told, if you can take your focus away from his neck, Mosquera has a pretty solid physique. He has strong attributes everywhere, with good legs and a balanced upper body.

You can see from this recent physique update, that he has quads that compliment his shoulders, giving a good balance from top to bottom. There are not any real weak points that jump out with his package.

As a reminder, Rubiel Mosquera competes in the IFBB Elite Pro League, which is a separate entity from the IFBB Pro League, where athlete qualify for and compete in the Olympia. So far, he has only had a handful of competitions, but he has scored fairly high with every outing.

So it would seem that, for the most part, his neck does not hinder him on the judge’s scorecards, at least at this point. We have other rare instances of bodybuilders with crazy necks being looked upon less favorably, so it is good to see that this is not the case here.