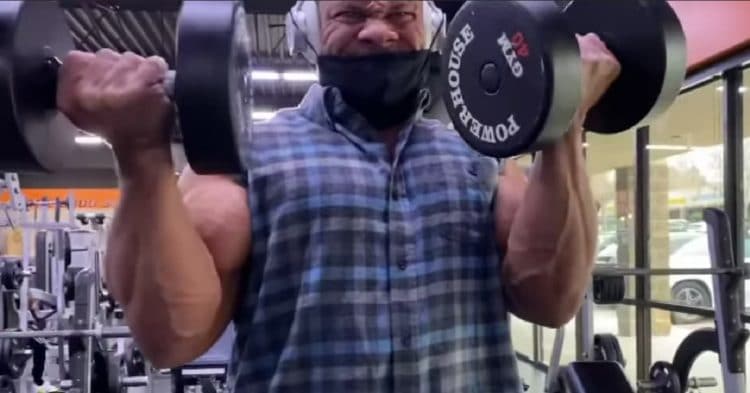 The future may be a bit uncertain at the moment for Phil Heath, but he is still staying in the gym. That was on display recently, when he showed off some bicep curls and a vacuum pose that has left fans’s jaws on the floor.

After coming in third place at the 2020 Mr. Olympia, some have pondered if it is time for Heath to retire from competition. That is not to say he doesn’t still have a lot to offer, but more that he has nothing left to prove after winning the title seven times.

In fact, last week it seemed like Phil could be hinting that he was moving on to other ventures, after a cryptic post to social media. He did not outright say so, but the message had fans and fellow bodybuilders buzzing with curiosity.

Whether or not Phil Heath decides to compete again remains to be seen, but there is one thing that is certain. He is in phenomenal shape, and never strays too far from the gym.

This was put on full display recently, with a post that he shared to Instagram. Here the bodybuilding legend can be seen moving around some dumbbells with hefty bicep curls, showing off his massive arms and tremendous conditioning in the process.

It would be satisfying enough to end things here, just mesmerized by the gigantic biceps that Phil Heath has. However this was not the only insane update that we got from him in the last few days.

Earlier in the week, his wife Shurie Cremona shared a side shot of his midsection, while he was doing a vacuum pose. This is important to see, because the biggest criticism that Phil has dealt with over the years, especially in recent times, has been with his midsection.

It is hard to tell without seeing him from the front, but by all accounts this update makes it seem like Heath has put a renewed focus into his gut health, and put those concerns behind him. This was only backed up by the remarks that Shurie made to accompany the photo.

“There are many layers to healing!! Many don’t know that Phil Heath has been through an insane amount of stress and hardship. The loss of his father while he was guest posing, an extremely expensive, very hostile, emotionally draining, ongoing divorce battle, the loss of his step mom, helping his brother who is very high functioning autistic who has no parents, and loss of companies he built due to bad partnerships.

I have been with Phil for 6 years and I have seen countless stupid jokes about Phil’s stomach and how he is “pregnant” the gut comments from judges, fans and fellow ifbb pro’s. Hate comes with being the best, especially while being the first Mr.O to endure social media. Fact is, Phil experienced hate in high school and college while playing ball lol it is nothing new and he knows it comes with the territory,” Shurie wrote.

“I am so proud to help him in this chapter. The best chapter that involves continued healing, letting go of traumatic past bs, unconditional love and the freedom to be himself! Phil Heath I am proud of your resilience, strength and your relentless pursuit for greatness in ALL you do. I love you!”

After these recent updates, fans can only hope that Phil Heath is not going to retire after all, and that we will see him take the stage once more. Whether or not he can win the Olympia again is another question, but if he truly has healed his midsection, it is at least worth giving it another go.