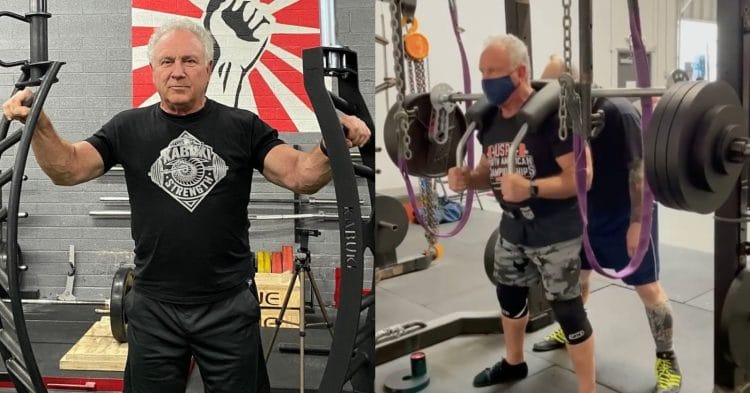 Over the years, Rudy Kadlub has proven time and again that age means nothing to him, in terms of his powerlifting skills. He proved that yet again recently, by putting together a crazy squat set to ring in his 72nd birthday.

As much as Kadlub is known for being the CEO of Kabuki Strength, one of the premier brands for workout equipment, he is much more than that. He is an elite powerlifter who has maintained a high level of skill well into his senior years.

Well into his seventies Rudy still competes at a high level, with his last contest being as recent as November. He has captured numerous world records for 110kg lifters in his age group, and shows no signs of slowing down as time rolls on.

The most recent unbelievable feat from Rudy Kadlub came with a recent post to his Instagram. Here, the powerlifting veteran shared a video of a crazy squat set to celebrate turning 72 years of age.

The clip sees Rudy scoring a fitting 172.4kg (380lb), which is impressive enough on its own given his age. However it was about more than just the weight, as he took that number for a ride for a whopping seven reps, which was a rep PR at this weight.

“380×7. Rep PR with this weight. 5 days before my 72nd birthday. Good to have long time training partner Paul Downs back in the Lab with me along with new training partner, my son, Andy. ⁣”

Not only is it great to see Kadlub moving this type of weight around at nearly 72 years old, but it is sweet to see him doing so with his son. We have seen time and again that powerlifting can be a family endeavor, and it is nice to see Andy getting involved.

The real story here though, is just how smoothly that weight moved. He whipped out those reps with ease, showing that while most people his age are considering a move into a retirement home, he is still making real gains.

Currently Rudy Kadlub is in prep for the 2021 Drug Tested Nationals, which is about 15 weeks away. So not only has he been working his squat, but he has been grinding out his bench press too, as evident by the 124.7kg (275lb) double that he hit a few days earlier to kick off a new training block.

A happy birthday is in order for Rudy Kadlub as he continues to show that if you really want to, you can still achieve great things in the weight room. It will be exciting to see him competing this July.