Life and accomplishments of Jujimufu aka Jon Call 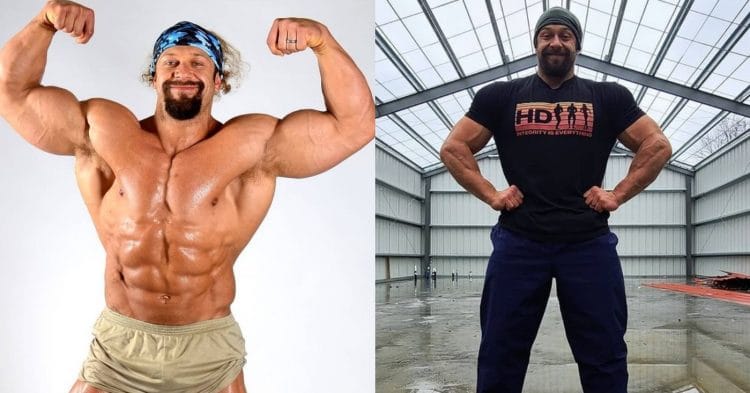 He was involved in Taekwondo at age 13 and by 14, his parents bought him a gym membership where’d he train after school and found a love in lifting weights. He especially fancied the deadlift and squats and not much has changed.

“The gym was right across the street from my school, so I lifted weights after school while I waited for them to give me a ride back home. I fell in love with deadlifts and squats and have continued training them.”

At age 15, Jon Call discovered an activity online called “tricking” that involves doing a combination of flips, twists, and kicks.

He’d practice in his backyard until he learned many of the techniques and it turned out to be beneficial for him to add to his Taekwondo repertoire. So he practiced improving his flexibility every night for two hours and in two months was able to achieve his goal of doing full splits.

In 2002, he launched the website tricktutorials.com that became a big success, and he started combining his tricking abilities with bodybuilding and strength feats.

He used his acrobatic skills to compete in America’s Got Talent competition Season 11.

Jon gave himself the nickname Jujimufu when he was 14 due to being frustrated while trying to find an AOL username that wasn’t taken of which he yelled out JUJIMUFU! Well, it’s stuck with him ever since!

After graduating college, Call worked as a technical manager for a biotechnology group for seven years.

However, he eventually quit in 2016 because he was making a better living doing fitness.

“My advice for earning a living for anyone, is to try to do it by doing something you’d be doing anyway, regardless if you were getting paid. If that’s not possible, then earn your living doing something passable or easy, that doesn’t get in the way of you living your life outside of it. NEVER EVER EVER work a job you hate: quit and get an easy job.”

But late last year (2020), he asked fans to vote on whether he should enter a bodybuilding competition of which most said yes.

So he enlisted the help of IFBB legend Kai Greene to help with his posing and even had a date set for his debut that would have been in March 2021 at the Arnold Amateur.

He then teamed up with IFBB pro Antoine Vaillant in prep for competition and decided the iconic Flex Wheeler would be his posing coach.

But, unfortunately for him and all other competitors, the prestigious Arnold Sports Festival that takes place in Ohio every year was postponed indefinitely.

So at the moment, his bodybuilding career is uncertain but it’d be awesome to see him on stage one day in the near future.

Jujumufu trains about 5-6 days per week and 1-2 hours per session. Of course, he trains for different things including tricking, Strongman, bodybuilding, and powerlfiting, so there’s a lot of variety in his training.

“For skillwork I just work on my favorite moves. For bodybuilding I do the opposite: I put most of my work toward my weaknesses instead of my favorites.”

Jujimufu has acknowledged that he has underwhelming genetics when it comes to certain body parts such as his chest and biceps. So he trains accordingly to ensure he does what he can to maintain balance between muscle groups.

“For example, I have terrible genetics for pectoral and bicep development, so I have to work those groups more. While my back responds to any sort of mindlessness; it adapts quickly to new loads and exercises.”

But he’s made great improvements and is still an incredibly impressive specimen.

Wednesday: Back, glutes, and Strongman training

“Know the difference between not taking something seriously, and being capable of laughing at it because you’ve overcome it. There is nothing on this earth that you cannot work to one day stand above and make a joke about or be silly about. That includes yourself. If life is still too heavy to make fun of for you, then at least begin training yourself to smile. Because you will make more friends when you smile more, and friends can help with some of the heaviest lifting.”

Jujimufu doesn’t have an exciting diet but he does follow a bodybuilding-style eating regime that consists of high protein, higher carbs, and lower fat intake.

Here are a few of his typical meals:

Jujimufu owns several businesses including his primary website jujimufu.com where he offers a range of products from smelling salts to training programs, apparel, books, and more. He also owns gripgenie.com where he sells grip-improving equipment.

He has a YouTube channel where he shares a variety of content ranging from training to challenges, collaborations, and more. His channel has over one million subscribers.

Recently, Jujimufu explained that he’s parted ways with his business partner and film man Tom Boyden. The latter has talked about the situation on YouTube.

What inspires and motivates Jujimufu? Here are some words from the big man himself.

“Ideas motivate me. I’m motivated to act on these ideas because they haunt me until I make a video or write about them to share with others. This is the only thing that has ever motivated me. People encourage me to continue because they sometimes like what I do, and this motivates me to come up with more ideas. Most importantly though, I act on my ideas, because I don’t want someone to do them before me! And so it goes in a circle round and round…“

Jujimufu (Jon Call) is a great example of someone with big ambitions and who wasn’t afraid to pursue his dreams and goals. He found a passion in being physically fit, strong, athletic, and active and made a successful career out of it, and his advice to anyone is to pursue a career in something that they’d do even if they weren’t getting paid to do it.

Jujimufu didn’t leave success to chance and he’s a big inspiration to fans around the world.