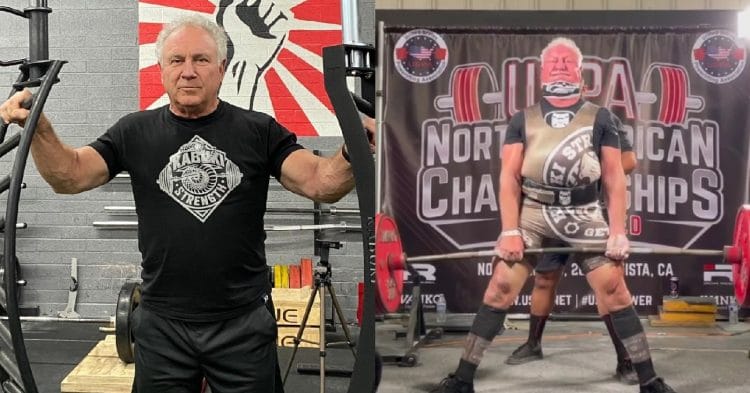 There have been some pretty impressive performances in the world of powerlifting recently, especially from young talent. However Rudy Kadlub decided that he could add to this in a big way, even at 71 years old.

Although he is primarily known as being the man who is CEO of Kabuki Strength, Kadlub has worked hard over the last decade and a half to establish himself as a powerlifter as well. Not starting his competitive career until he was 55, Rudy has been able to avoid a ton of the injuries that plague others, who have been potentially competing for their whole lives. Yet he still has managed to put up some incredible numbers over the years, setting world records in the 198lb and 220lb divisions, proving that just because he started late does not mean that he is any less skilled or strong than other Masters Division athletes.

That being said, Rudy Kadlub took things to a whole new level over the weekend, while competing at the 2020 USPA Drug Tested North American Championships. Competing in the 242lb division technically, but only weight 222lb, he managed to hit a 430lb squat, 303lb bench press, and 518lb deadlift, leading to a 1251lb total. If this seems impressive, that’s because it is, landing Rudy world records for all four numbers.

As Kadlub explains in the post, this performance over the weekend has given him all of the records for three different weight class. That means he holds 12 world records total, a feat that defies logic. All of this is without mentioning the fact that he got these latest records while barely even being in the 242lb weight class. What an outstanding showing from the 71-year old.

Being the intelligent man that he is, Rudy Kadlub takes a very scientific approach to his training. He is meticulous with his training blocks leading into a contest, and not only measures his weights, but also the times it take for him to do each rep. Take for example, this training update three weeks before the Nationals, where he squatted a 715lb double, moving the weight at .33 meters per second.

It is absolutely wild to see someone at the age of Rudy Kadlub, doing the things that he does. He has been an inspiration to powerlifters around the world, and continues to show his skills with every performance.