Russell Orhii jumps up to the 90 kg weight class for the first time in his professional career and impresses. 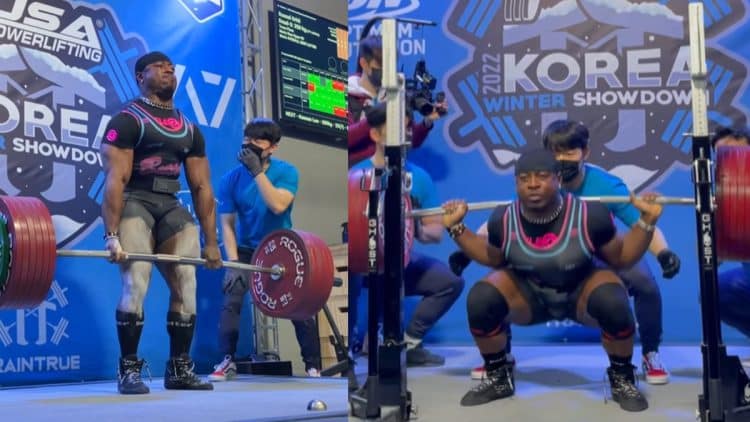 One of the world’s greatest powerlifters, Russel Orhii, recently traveled to Seoul, South Korea to compete in the 2022 USAPL Korea Winter Showdown. While Orhii typically competes in the 82.5-kilogram weight class, he made the decision to jump up to the 90-kilogram weight class for this particular competition. Despite the increase in weight class, Orhii still managed to come out as the best lifter in the U90KG raw division, as well as score some career-high lifts.

The sport of powerlifting consists of three lifts: the squat, bench press, and deadlift, to set the Total score. Russel Orhii set new competition personal records (PRs) in three out of the four events at the 2022 USAPL Korea Winter Showdown. He started off strong with a 340-kilogram (749.6 pounds) squat competition PR, which was an impressive feat of strength in what is his greatest event. Russel then moved onto the bench press, where he lifted a respectable 195 kilograms (429.9 pounds).

“I decided to compete at 90kg so I can enjoy the full Korean experience which in turn led to me putting together a pretty good performance.

This was a HUGE meet PR AND I managed to secure the best 90kg total for the year while maintaining the top spot for 82.5kg 💪🏾”

Russel Orhii’s exact bodyweight for the 2022 USAPL Korea Winter Showdown was 89.86 kilograms (198.1 pounds). He surprisingly missed his first squat attempt, but did not let that rattle him. Instead, Russel successfully completed all eight remaining attempts and scored massive competition PRs in the process.

The 2022 USAPL Korea Winter Showdown was Russel Orhii’s 18th-sanctioned powerlifting appearance and his 17th victory. He already holds multiple World Records, a World Championship title, and numerous American National titles. Orhii achieved everything by the age of just 28 years old, so there are still years ahead of him.

Russel Orhii is stronger than he has ever been, which is an extremely pleasant sight to see. He is enjoying life and pushing himself to the limits, both in powerlifting and bodybuilding. Whatever he decides to do next, it will be nothing short of extraordinary.

Big Ramy Sends An Emotional Message After Title Loss At 2022 Mr. Olympia: “I Will Never Give Up, I Will Be Back”