Russel Orhii is once again pushing the boundaries in his best event. 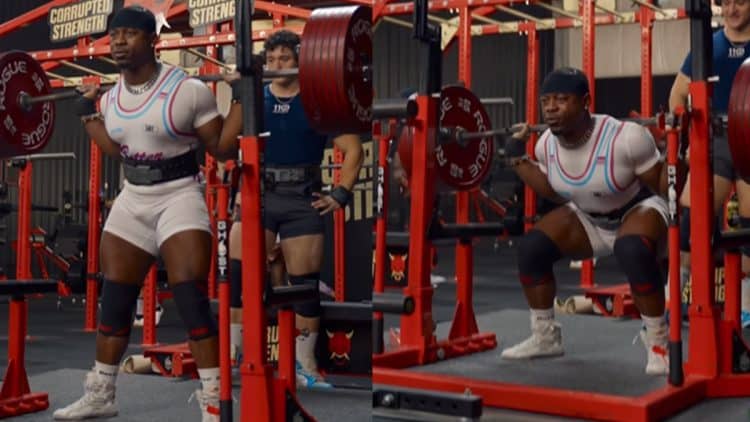 Russel Orhii has been extremely active throughout the course of this year, even though he did not compete very frequently. In addition to powerlifting, Russel developed a desire to test his bodybuilding abilities, which obviously required great effort. However, he did not neglect the sport of his origin, as Russel became a so-called “PowerBuilder”. While he managed to lose body fat and sculpt a shredded physique, Russel did not lose any of his strength. In fact, the outcome was quite the opposite, as he is now landing new PRs. The most recent one being his 320-kilogram (705.5-pound) three-rep squat PR, which Orhii posted on his Instagram page.

Russel Orhii has built a name for himself through the squat, having claimed multiple World and American Records throughout his career. So, now that he is adding more weights to his lifts, Russel is on the right path to breaking some more records.

Regarding his newest three-rep PR, Russel only used a lifting belt and knee sleeves to aid him in completing it. So, it would be raw by powerlifting standards. Russel was seemingly very confident that he would score a PR, as he was seen smiling just before going for the third repetition. The confidence paid off, as Orhii completed the rep with little to no struggle.

It is not clear how much Russel Orhii weighed at the time of his 320-kilogram (705.5-pound) squat three-rep PR. He usually competes in the 83-kilogram weight class, but it is unknown if he has gained weight since his last powerlifting appearance in June of this year. That competition was the 2022 USAPL Mega Nationals, where Russel managed to set new American National Squat & Total Records.

Since he debuted in the sport seven years ago, Russell Orhii has competed at least twice a year, but he has not yet appeared in his second competition this year. In total, Orhii has participated in 17 sanctioned powerlifting competitions and got 16 victories. His greatest achievements are winning the 2021 IPF World Classic Powerlifting Championships, and numerous American Nationals, and setting countless records of all sorts.

The future plans of Russel Orhii are unknown, but his physical shape seems to be improving in every aspect. It is therefore safe to say that whenever he steps onto a powerlifting platform again, he will not fail to impress those watching.