Big Ramy Sends An Emotional Message After Title Loss At 2022 Mr. Olympia: “I Will Never Give Up, I Will Be Back” 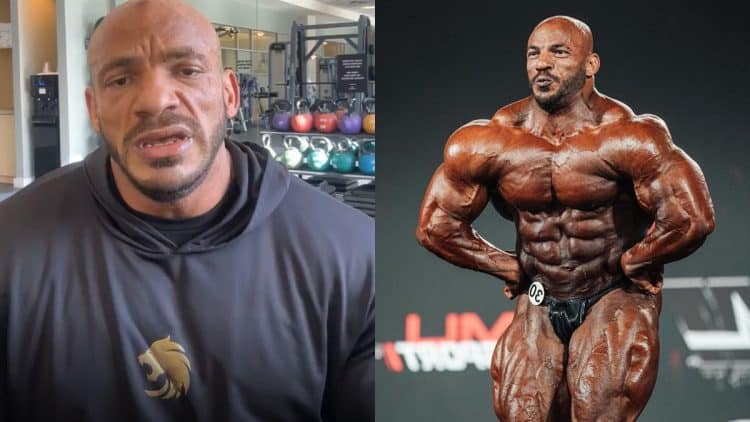 The 2022 Olympia is in the books. The 58th edition of the most prestigious professional bodybuilding competition took place from Dec. 15 to 18 in Las Vegas, Nevada. Out of the 11 titles that were up for grabs at the 2022 Olympia weekend, a total of 6 changed hands. Former 2-time Mr. Olympia Mamdouh ‘Big Ramy’ Elssbiay was among the champions that were disappointed this weekend. Winning the championship title is a difficult feat but defending it is a different ball game altogether. Egypt’s own Big Ramy is one of the most accomplished active bodybuilders competing in the IFBB Pro League’s Men’s Open division. After winning the Mr. Olympia title in 2020, Ramy defended it at the 2021 Mr. Olympia and looked invincible until this past weekend. He was a favourite heading into the 2022 Mr. Olympia but only managed to score a top five finish.

The line-up at the 2022 Mr. Olympia was considered to be the most difficult in recent memory. The stacked roster boasted experienced veterans like Brandon Curry, William Bonac and Ramy himself. Young contenders like Nick Walker, Hunter Labrada and Hadi Choopan were nipping at the heels of these veterans for a while. Addition of hot prospects Andrew Jacked, Michal Krizo and Samson Dauda ensured that the battle for top ten would be more fierce than ever witnessed. Although Andrew Jacked and Michal Krizo had a lot of hype behind their names, Hadi Choopan, Nick Walker, former 212 Olympia champion Derek Lunsford and Samson Dauda quietly creeped their way up and pushed Ramy throughout the duration of the contest.

Despite being a champion, Big Ramy entered the arena with a strong sense of confidence during the prejudging stage but had to deal with a bunch of contenders trying to push him. However, Ramy’s physique appeared depleted compared to the package he brought in the previous year. During the final callouts, IFBB head judge Steve Weinberger placed the reigning champ at the far end instead of placing him in the center. Nick Walker, Derek Lunsford, and Hadi Choopan commanded the center for the most part. At this point, it appeared that the title might have slipped out of Ramy’s hands already.

Hadi Choopan maintained the energy throughout the duration of the finals and got as many comparisons as he could. Former 212 Olympia champion Derek Lunsford and Nick Walker also continued to push Big Ramy through impressive posing routines. In the end, it was The Persian Wolf Hadi Choopan that dethroned Big Ramy and walked away with the 2022 Mr. Olympia title. He became the first Iranian bodybuilder to hold this distinction. Derek Lunsford finished as a close second while Nick Walker took a two-spot jump from his last year’s standing and finished third. Brandon Curry made significant improvement in his size and grabbed the fourth spot while Big Ramy completed the top five with a fifth-place finish.

The former Mr. Olympia shared his thoughts on the results and future plans in a ten-minute-long Instagram video. He addressed his Egyptian followers first in Arabic and then translated his statement into English to reach out to his supporters around the world. In his address, Ramy acknowledged the newly crowned Mr. Olympia Hadi Choopan’s struggles over the years. He congratulated the Iranian bodybuilder on the well-deserved win. Ramy works hard to be a positive representation of bodybuilding and is grateful to all the competitors and judges who are a part of the sport that he considers his own.

“From the beginning I have to say congratulations to Hadi. He deserves it. He is the Mr. Olympia right now. He tried for many years to be in this place and I respect that. I am thankful for all the competitors who fought for one reason, to be a good representative of bodybuilding. Second, I need to thank all the judges and all the people that supported my game.”

“It’s my game. I love this game from the beginning and I always tried to bring my best because it is my hobby. I loved everyone and loved my game and I need to say I have been broken many times in my life and this is not the first time. But I always came back stronger than ever.”

Big Ramy witnessed one of the biggest fall-offs for a champion in the history of the sport as he went from being the reigning champ to being number five in one year. This unforeseen skid has become one of the major storylines heading out of the 2022 Mr. Olympia. It has raised questions about the former champ’s prospects in the Men’s Open division going forward.

However, Ramy’s career trajectory prior to the Mr. Olympia championship reign was not a one-way street. He reminded everyone that following a runner-up finish behind Phil Heath in 2017, Mamdouh suffered a massive 4-spot skid and finished sixth at the 2018 Olympia. The loss could not keep him down and Ramy bounced back by claiming victory at the 2020 Olympia. He plans to turn the clock back once again and come back stronger.

“I promise you guys I will do my best to get back again stronger than ever. I don’t promise to win or to lose, I respect other people. But I will say I will do my best like I have done my whole life to be number 1 again.”

“I can say it to all the competitors in the middle east, we can come back from this. I really appreciate all the people’s support around the world.”

Is it the end of the road for Big Ramy?

Many experts have noted that Big Ramy’s physique seems to be on a decline for a while. A few months ago, George Farah pointed out that Ramy was not at his best the previous year. He noted that if the Egyptian bodybuilder did not make adjustments, he would have a tough time against some of these young contenders that can match him in size. In today’s day and age, sports evolve rapidly due to an influx of technology, knowledge, and training methods. Every new generation of athletes makes the previous one obsolete. Hot prospects Andrew Jacked and Michal Krizo were expected to do damage at the 2022 Olympia and make entry into the top ten. Some veteran voices in the industry even opined that Andrew Jacked could possibly beat everyone at the show.

While Andrew and Krizo could not achieve the feat this year, they are on an upward trajectory and will definitely bring a better package next year, making things that much more difficult for the aging veterans. The visual evidence suggests that the time and sport have both caught up with Big Ramy but there is always room for miraculous comebacks in every sport.

Olympia president Dan Solomon recently revealed that Olympia will return to Orlando, Florida for its 2023 edition. On both occasions that Olympia went to this beautiful sun-drenched state, Ramy emerged victoriously. If Florida is indeed a lucky charm for Ramy, he might be able to get his Mr. Olympia title back in November and get back on top of the heap. Fitness Volt wishes the former 2-time Mr. Olympia Mamdouh ‘Big Ramy’ Elssbiay all the best in his journey back to the top of the Men’s Open division.

3 Day Fast Guide: What Is a Three-Day Fast, and How Do You Do It?