Krizo trains hamstrings, calves, and abs two weeks out of the 2022 Olympia. 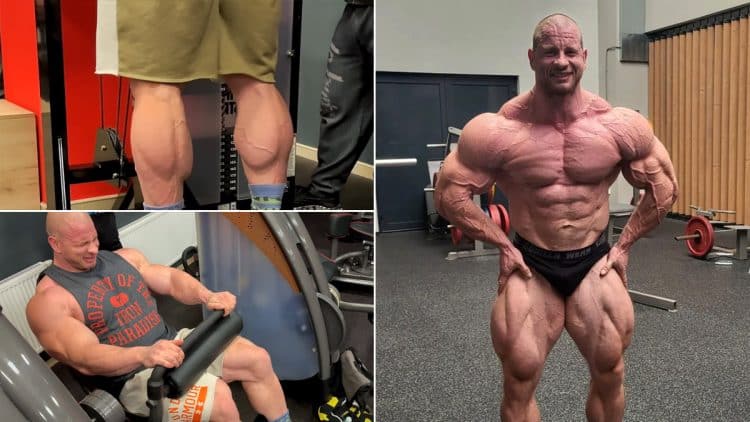 Slovakia’s own Michal Krizo has risen meteorically in the IFBB Pro League’s Men’s Open division. The 32-year-old competed in the IFBB Elite Pro League until last year. His transition to the NPC earlier this year created a lot of stir in the bodybuilding community. Krizo’s physique has genuinely impressed veteran bodybuilders like Samir Bannout and Jay Cutler. After earning the IFBB Pro card at the 2022 Amateur Olympia Italy, the Slovak’s stock only went up. He then secured a direct invitation to the 2022 Olympia by obliterating his competition at the 2022 EVLS Prague Pro. However, many experts raised concerns over Krizo’s level of conditioning. Fully aware of the criticism, Krizo has vowed to bring a better physique ‘a million percent’.

Krizo’s quick rise in the pro bodybuilding circuit has earned him a few rivals. Old rival Blessing Awodibu welcomed the Slovak ‘to the a** whooping league’ when Krizo turned pro in the IFBB Pro League. Canadian bodybuilder and reigning Classic Physique Olympia champ Chris Bumstead’s former Coach Iain Valliere also had a social media altercation with Krizo. However, the Slovak has promised to show Valliere ‘what bodybuilding is’ when they meet on stage at the 2022 Olympia. The expectations are high from Krizo, and former Mr. O Bannout has predicted that Krizo and Derek Lunsford will ‘shake up’ the event.

Recently, Krizo went through a hamstrings, calves, and abs workout for the last phase of his Olympia prep. The video of this session was posted on Krizo’s YouTube channel.

Krizo started the training session with hamstring exercises. The 32-year-old first performed the seated leg curl to isolate this muscle group. After doing a few sets on this machine, he took to the lying leg curl. He wrapped up the hamstrings exercises with another variation of this exercise and did the kneeling leg curl. While all these exercises are effective in achieving hypertrophy, working from different angles and positions helps achieve complete growth.

Additionally, seated leg curls allow for a greater range of motion among the three variations, and kneeling leg curls isolate the hamstrings to a greater extent as your quads are pressed against a pad

Krizo worked the abdominal muscles with the machine leg raise crunch. This exercise is effective in building overall core strength. In addition to working the abs, the movement works the obliques. However, it is important to be cautious as using extremely heavy weights on this machine can put you at risk of injury. Krizo got a few sets of machine leg raise crunches under his belt and wrapped up the training session.

Krizo made earning an IFBB Pro card and qualifying for the Olympia in the same year look relatively easy. However, the task ahead is monumental as Krizo will go up against elite bodybuilders while being relatively inexperienced in the new federation. Fans will be glued to their seats to watch the package Krizo brings to the 2022 Olympia, scheduled for Dec. 15-18, in Las Vegas, NV.

You can watch the full video below, courtesy of Michal Krizo’s YouTube channel: