If done in competition, Russel Orhii's new 760 lbs deadlift PR would also be an IPF World Record in the 83 kg weight class. 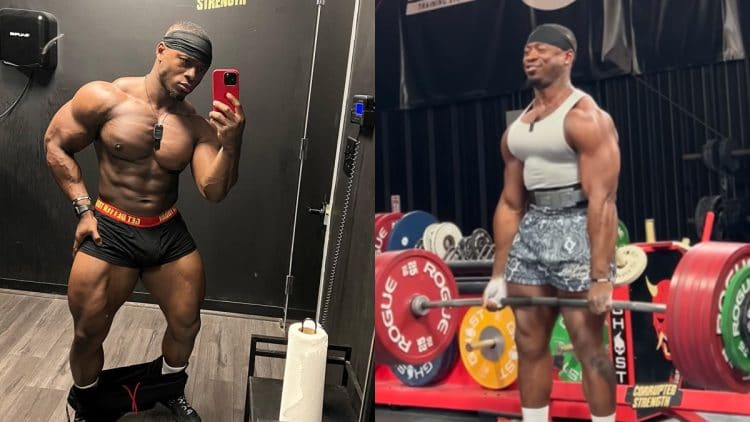 Powerlifter Russel Orhii is continuing to make waves by breaking records on a regular basis. He is mostly known for his squatting prowess, but it seems like we are entering a new era of Russel Orhii’s domination, as he has just made some tremendous progress in his deadlifts. Orhii has been chasing big numbers for some time and his recent feat is incredible. The 2021 IPF World Champion posted a new 760 lbs (345 kg) Deadlift PR from training on his Instagram account. Russel’s new PR is 26.5 lbs (12 kg) heavier than his current competition best.

Russel Orhii’s 760 lbs (345 kg) deadlift was done with a conventional stance and a mixed grip. He also only used a lifting belt, so his new PR is considered as raw.

Russel did not specify his bodyweight at the time of the lift, but his usual competition weight is 83 kg (183 lbs). The current deadlift IPF World Record in the 83 kg weight class is held by Renaud Pierre, having lifted 746 lbs at the 2021 EPF European Classic Powerlifting Championships. This means that Russel’s 760 lbs pull could also be an Unofficial IPF World Record.

Russel Orhii started competing professionally in 2015 when he was just 20-years-old. Since then, he has taken part in 16 sanctioned powerlifting competitions, and managed to win 15 of them. However, his last competition was in September of last year, and it was the 2021 IPF World Championships. Russel won the competition and will try to defend his title later this year. Apart from being the world champion, Russel is also a 5x American National Champion.

It is worth noting that Russel Orhii has beaten all of his competition PRs in the last few months. Judging by this, it seems like he will put on a brilliant show at the next competition he takes part in.

Russel Orhii is also planning on competing in a bodybuilding show later this year. He has recently stated that the weight cut has begun, but didn’t specify if it is for bodybuilding. Currently, it seems like he has found a perfect balance between the two sports, as he is gaining strength. His physique also looks incredible, so it will be interesting to see how he fares in bodybuilding. However, regarding the 2022 IPF World Championships, Russel is on route to breaking three powerlifting World Records.