Russel Orhii walked away from the 2021 IPF World Classic Powerlifting Championships with world records in the squat, deadlift, and total 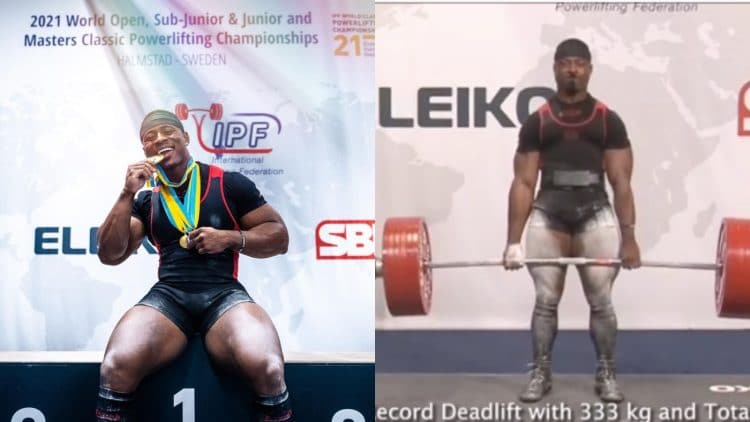 The 2021 IPF World Classic Powerlifting Championship has been a platform for world records to be broken. In the case of Russel Orhii, he would walk away with three different records in the 83kg division.

Orhii was not the first person to land three world records at the World Classic Powerlifting Championships, being held in Halmstad, Sweeden. We already saw French powerlifter Lya Bavoil pull off a world record deadlift, squat, and total in the 63kg division.

That was before Russel took the platform where he was able to pull off his own trio of raw world records. He also hit a world record deadlift, squat, and total, surpassing two of his own records, and taking one that he did not already have.

The first world record that Russel secured was with his 320kg squat, which he did in a smooth rep. According to the IPF website, this surpassed his own world record squat by 7.5kg, beating the 313kg squat that he did at the 2019 IPF Worlds.

Check out video of this squat, courtesy of the IPF Instagram page:

Next up for Russel Orhii was the bench press, which was not a world record but was impressive all the same. He benched 187.5kg, which was about 30kg shy of the record that Owen Hubbard holds for the 83kg division. At the time of writing, no video has been posted of this bench.

It all came together during the deadlift portion of the event, which is where Russel was able to finish the contest with an additional two world records. The 333kg pull saw him surpass the record previously held by Yanis Bouchou, who deadlifted 331kg earlier this year.

With that deadlift, Orhii secured a third world record for his total, something that he already held. He passed the 833kg record that he held prior, also having held that since the 2019 IPF Worlds, extending his record by 8kg.

It seems like nearly everyone who competed at the 2021 IPF World Classic Powerlifting Championships had an impressive performance, not least of which was Russel Orhii. With this mind melting performance, he not only secured his second gold medal at this meet, but he cemented his place as the top 83kg powerlifting in the world today.

Read also: Russel Orhii Shares His Off-Season Workout, And It Is Harder Than You Think