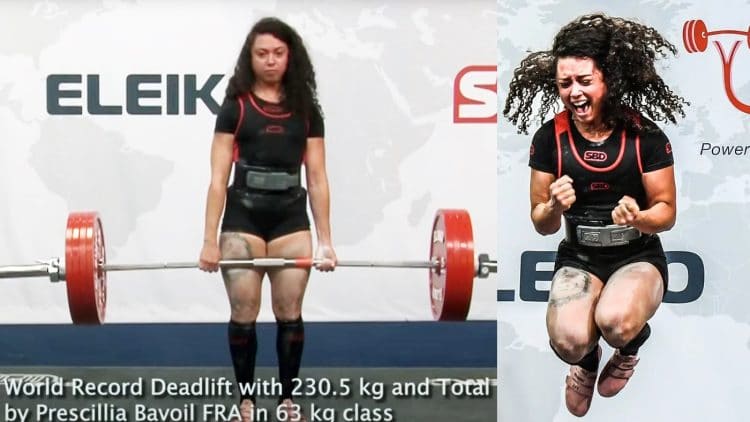 Elite powerlifter Lya Bavoil returned to action at the 2021 IPF World Classic Powerlifting Championships. Here she had an incredible performance that saw her walking away with a total of three world records.

Bavoil has long been considered one of the best powerlifters competing in the world today. She has already captured multiple records in her time competing in 63kg and 72kg divisions, and seems to be improving with each appearance on the platform.

Her most recent appearance saw her taking on the IPF Worlds, where she absolutely crushed the competition. Not only that, but she scored a trio of Raw world records, extending some that she already held.

Here is a breakdown of Lya Bavoil’s lifts from this meet:

First up for Bavoil was the squat, which she was able to hit with relative ease, as seen in the video posted to the IPF Instagram page. It is worth noting that while this is being listed as a world record, Lya did a 210kg squat at the French Nationals earlier this year, although that did not count as an official world record due to it being a national competition. She also tried to replicate that lift here, but failed.

Next up was the bench press, where Lya Bavoil pressed 112.5kg, which was about 31kg shy of the world record, and matched her competitive best. At the time of writing, there has not been a video posted of this lift, but the article will be updated when that becomes available.

To close out this impressive run, Lya absolutely smoked a massive 230.5kg deadlift, passing up the world record previously held by Jordanne Panton by 3kg. The IPF YouTube channel uploaded a clip of this lift, which you can see below.

It goes without saying that this was one of the best performances that Lya Bavoil has had to date. Not to mention that with this being a worldwide competition, the records that she was able to set here count as official world records, rather than at the national contest she won earlier this year.

It seems like every single time that this young competitor is on the roster for a meet, something incredible is sure to follow closely behind her, and this was no exception. At just 27 years old, there is almost certainly more to come from this powerlifting phenom.