After a terrifying bench press accident during a session with Larry Wheels, Ryan Crowley underwent a successful surgery with help from a GoFundMe. 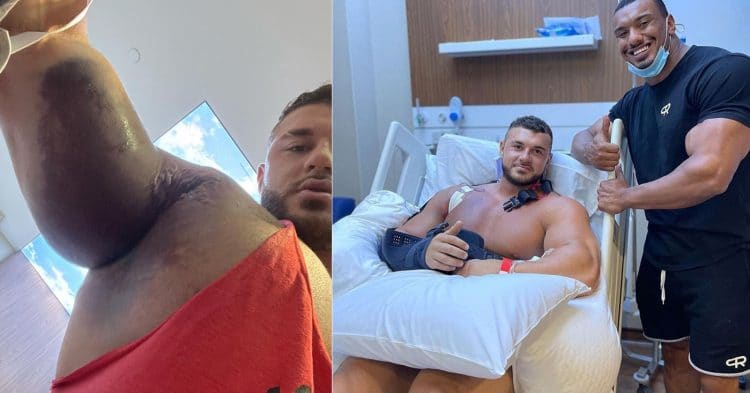 UK-based bodybuilder Ryan Crowley experienced one of the most devastating accidents of his life recently when he failed a very heavy bench press that caused his pec muscle to tear right off the bone. Thankfully, he had powerlifting phenom Larry Wheels and a few other spotters there to help prevent the weight from crushing him. But he’s had a successful surgery and is now in recovery.

You can watch it happen in the post below but be warned, it’s not for the squeamish.

In the same post above, Wheels asked fans to help support his friend who has lots of potential as a young, 23-year-old bodybuilder standing at 6’3″, and weighing over 330 lbs.

He acknowledged how devastating and career-threatening this injury was, but he wanted to help his friend get back to his one true passion in bodybuilding.

Because Crowley is from the UK and was away from home when he tore his pec, it wouldn’t be covered by his insurance. But he’s blessed to have such a great friend in Larry Wheels who set up a GoFundMe to help with the costs of his surgery and rehabilitation. The goal was to raise 25 thousand dollars and they were able to raise over 26 thousand dollars, which was a tremendous help. They were extremely grateful for the contributions.

Crowley had been training with Wheels of which their recent sessions can be seen on the latter’s YouTube channel. But unfortunately, it’ll be a while before he can hit the gym again, as the injury will set him back for months, or at least we hope so.

Following the accident, Crowley expressed his concerns regarding how the injury could potentially affect his career, seeing as aesthetics are essentially more important in bodybuilding than any other sport.

So, hopefully, his pec will heal up properly and maintain the same shape so he can continue on his road to bodybuilding success.