During a recent bench press session with Larry Wheels, bodybuilder Ryan "Big Rig" Crowley experienced what could be a career-threatening injury to his pec. 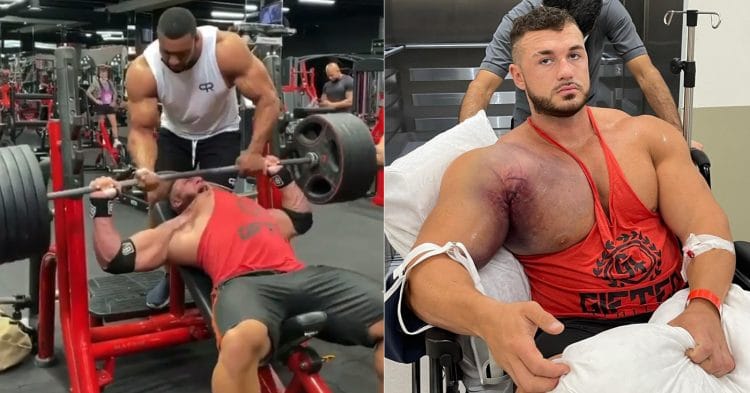 Training injuries are a normal occurrence; unfortunately, some are worse than others and can potentially be career-threatening. In a recent training session with powerlifting phenom Larry Wheels, up-and-coming competitive bodybuilder Ryan “Big Rig” Crowley experienced something similar when he tore his pec (chest) muscle completely off the bone midway through a heavy incline bench press.

Crowley is a 23-year-old UK native who’s been working as hard as anyone to make his dream of becoming a top bodybuilder a reality. And hopefully, this is just a temporary setback. But being young maybe to his advantage regarding the recovery process.

Larry Wheels took to Instagram to explain the situation and how he’s created a GoFundMe for his friend to cover the costs of surgery and rehabilitation.

Wheels explained that because Crowley is from the UK, his insurance will not cover the procedure and asks for financial support during this challenging time.

“As you can see from the injury, it is devastating. It is threatening his career,” said Wheels.

“He’s from the UK, his insurance will not cover the surgery. So I’m asking you guys to please help a brother get back on track and get him back to his one true passion.”

Wheels’ sees a lot of potential in the young bodybuilder explaining that bodybuilding is his passion and his one discipline and he wants to see him succeed in it.

We’ve included the post that shows the accident and you can also scroll through to see the after-effects. Some of the content is a little graphic though so just a heads up for the squeamish.

As you can see, he experienced the injury during the negative portion of the rep as the weight was clearly too heavy and we’re not sure whether something else was going on that made the injury so severe.

Here’s another post from Crowley’s Instagram showing the bruising and it’s not pretty. He’s already undergone surgery and hopes that his pec retains the same shape as it’s crucial for his career in bodybuilding where aesthetics are everything.

He also explained never having surgery before so it was a terrifying experience for him.

Here’s what he wrote…

“Cannot believe it happened, completely tore my pec tendon off the bone, I will be having surgery today at 5pm, praying that it gets it shape back and doesn’t ruin the rest of my career In bodybuilding before it’s even started!

Huge Thankyou to everyone for the messages and the support, it truly means the world! , if you know me you know this has hit me extremely hard, and struggling to deal with it, but let’s get through it and come out the other side stronger!

PS NEVER HAD SURGERY BEFORE IM SH*TTING MYSELF“

While this is a disheartening situation for Ryan Crowley, who’s also a personal trainer, he’s thankful for all of the support, and he’s blessed to have someone like Larry Wheels who set up a GoFundMe to help with the costs. Wheels’ has also had his share of injuries perhaps can be a much-needed source of moral support as well.

We wish Ryan Crowley a speedy recovery and continued success following his rehabilitation.