Samantha Eugenie was ecstatic about the new PR! 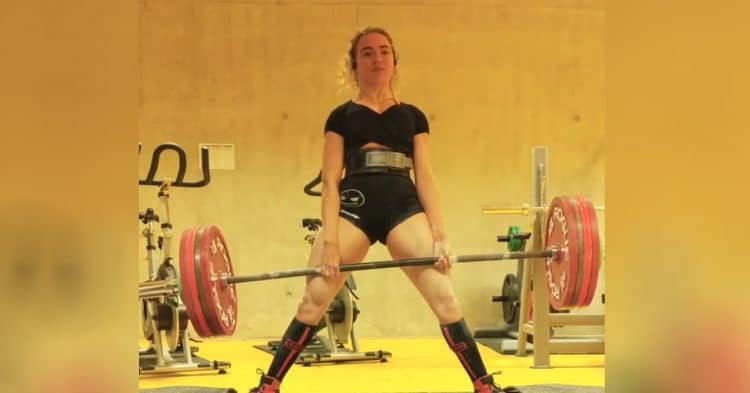 At just 17 years old, Samantha Eugenie from France has made a pretty big name for herself in the sport of powerlifting. She’s already an IPF Sub-juniors world/EU champion and holds several records (squat, deadlift, and total) in the 63kg/139lb class.

Eugenie’s most recent PR deadlift was in Early March where she pulled 216kg/476.1lbs as part of training for the Nationals before it was postponed. And since the French Nationals won’t take place as was originally scheduled, she also did a mock meet earlier this month where she achieved a 496kg/1093lb total.

But then recently, she was able to pull more than she ever has before, although it was a block pull PR. But it was still progress that she was happy with. Eugenie explained in the post that her decision to do a block pull was more so a psychological technique, as she has been afraid to load the bars lately.

Therefore, it gave her a confidence boost and a new deadlift PR.

WHY AM I DOING BLOCKPULL?

Personally, it is not so much to improve a technical point that I do it but more to solve a psychological issue. In the last few weeks I’ve noticed that I’m starting to be afraid to load the bars, so I think this variation can give me confidence.”

“ANNOUNCEMENT 🤩
I am very happy to announce the beginning of my partnership with @denovofrance !
Utopia was already accompanying me in my best training sessions so it’s a pleasure to join the team“

Samantha Eugenie is fortunate to be able to train as usual during these difficult times. With the French Nationals canceled, it’ll give her more time to perfect her technique and progress as needed. But we’re confident that when it comes time for competition, she’ll be ready to put up some big numbers.

Keep posted for more of her training updates.