Arnold Schwarzenegger and Edward Norton go far back and they recently teamed up to launch the Frontline Responders Fund. 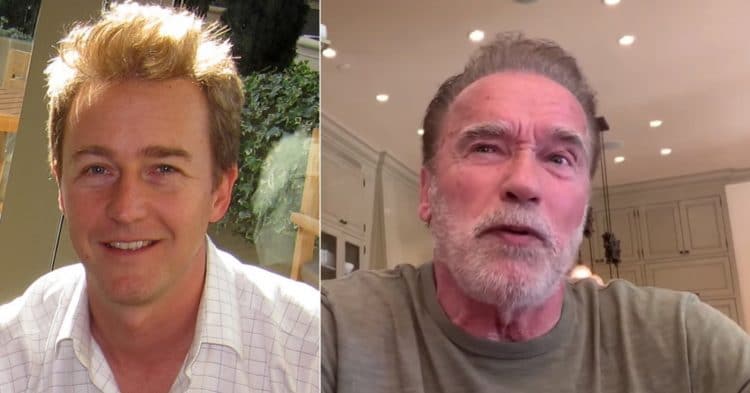 Bodybuilding icon Arnold Schwarzenegger joined TV host Jimmy Kimmel via video call to discuss what’s currently going on in the world. He was once the governor of California so he’s no stranger to the discussion of politics and the state of the economy.

Schwarzenegger also had some company too with his mini horse and donkey (Whiskey and Lulu) that he was feeding during the interview.

Then actor/filmmaker Edward Norton joined the conversation of which he told a story about the first time he met Arnold Schwarzenegger. Norton explained that he met Schwarzenegger at a bar at a wedding in the late 90s when the former was training for American History X.

So he asked the 7x Mr. Olympia for some training advice of which he broke down his routine that he did once a day. But the Terminator actor didn’t seem to be too impressed and made it very clear that he could be training harder.

“Arnold said you look good, you look trim,” Norton explained. I’m trying to put on size so maybe you could give me some advice“. “I told him my whole workout and goes yeah that’s pretty good are you doing two-a-day and I said no just once-a-day, and he said well that’s pretty pussy Ed.”

And then Norton talked about the Frontline Responders Fund, a joint venture between him and Schwarzenegger. The goal of the fund is to supply protective equipment for frontline medical personnel and so far, it has raised over $7 million dollars.

“Over 20,000 people have kicked in almost 7.5 million bucks. We’ve moved almost 8.5 million units of protective gear for various people who are buying them. But the goal is 10 million as Norton explained in the interview. They’ve made a lot of progress and are taking donations to continue supporting the very important workers during this period.

You can donate to the Frontline Responders Fund here.

Norton joined the conversation at 7:00 if you prefer to skip ahead.

13 Next Level Push-Up Variations For Mass, Strength, and Performance