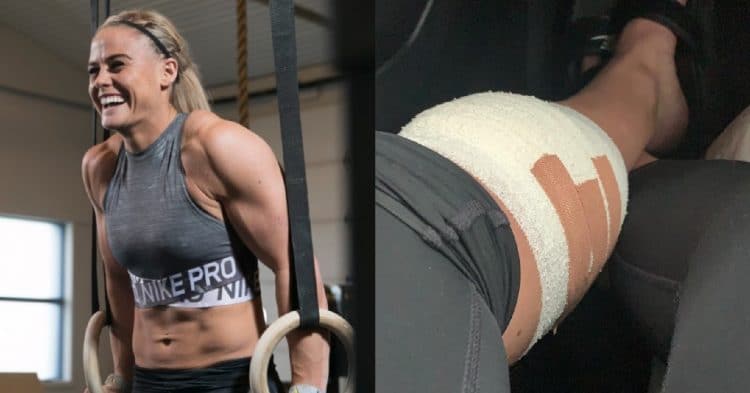 Many fans were disappointed by the performance Sara Sigmundsdottir had in Stage One of the 2020 CrossFit Games. Now she has revealed a pretty serious injury to her knee that affected her ability to perform at her best.

Sara Sigmundsdottir is one of the biggest fan favorites in the sport of CrossFit, as many people feel that she has what it takes to be the best on any given day. While she has yet to be crowned the Fittest Woman on Earth, she has scored as high as third place in both 2015 and 2016. Not only that, but she has been able to win the CrossFit Open on two occasions, including this year, which led to some high expectations leading into Stage One of the Games.

Unfortunately, Sara Sigmundsdottir would have an uncharacteristically poor performance at the Games, landing in 21st place and not moving on to the finals. This prompted many people to wonder what could have happened that led to such a bad showing. Well, taking to her Instagram in a three-part post, she explained that she had a pretty serious infection in her knee. Although she made it clear that this was not an excuse, she revealed that this led to low cortisol levels, also causing a decline in her ability.

“All of us who are chasing the Crossfit dream are dealing with some nags, soreness, stiffness and inflammation. It’s all a part of being an athlete and pushing yourself to the limit. We signed up for this and it is up to ourselves, and our team, to determine if we are fit to compete or not. Therefore, I will not offer any excuses for my performance at the @crossfitgames but I will admit it was way below the standards that I have set for myself.⁣
⁣
I came up short and that is on me. You girls who finished in the top 5 earned it and I can’t wait to watch you crush it in 2 weeks.

I have been dealing with an issue that originated in one clumsy box jump in May, where I split my shin wide open and ended up in the emergency room with 12 stitches 🙆🏼‍♀‍⁣
⁣
This was just few weeks before the @rogueinvitational, so I was in a race against time and allowed a shorter time than I should have to let the wound heal. 8 weeks later, after the wound had totally closed, an infection emerged. The swelling progressed rapidly and within hours it looked like I had a second knee on my left leg. Again I had to rush to the emergency room, this time for a minimal surgery which was followed by a cycle of strong antibiotics. ⁣
⁣
Once I was passed fit to start training again, I just moved on and did not really think back on this. I never really made the connection between this and the discomfort I was experiencing until my nutrition coach pointed out that I might have developed a cortisol issue as a result of the infection. As he described all the symptoms of “adrenal insufficiency” I felt like he was describing my current life. ⁣
⁣
A little too late I underwent a cortisol test and on this past Monday I finally received a firm diagnosis confirming that my cortisol levels were way too low. It is a huge relief to have these results and thankful to have figured out one of the reasons why I have not been fully myself in recent months.

I will admit it is hard to start off season on the back of recent events but I now have a path forward. I am going to embrace the challenge and take the time I need to fully recover and calculate my next moves while spending time with my people, and of course spoiling Moli A LOT🐶⁣
⁣
School has started again so a part of my focus is now back on my studies. I am also actively conversing with pioneers in their field on topics such as the mental side of being a competitive athlete, modifications to my nutrition and how to set up training for the next season. I feel good about this process and come February when the new season starts my promise to myself is to be fully recharged, lazer focused and ready to rock.⁣
⁣
To finish this off I want to say how grateful I am for my supporters, my team and my closest circle. I may be competing as an individual but none of this would work if I did not have you with me and believing in me. In recent days I have been reading through the messages and letters I have received and my heart has melted over and over again. I struggle to find the words to explain how much this means to me and how much this reinforces my will to come back stronger. ⁣
⁣
From the bottom of my heart – thank you❤️”

This obviously could not be fun for Sara Sigmundsdottir. Hopefully she can continue to heal up, and be back better than ever for next year’s season.