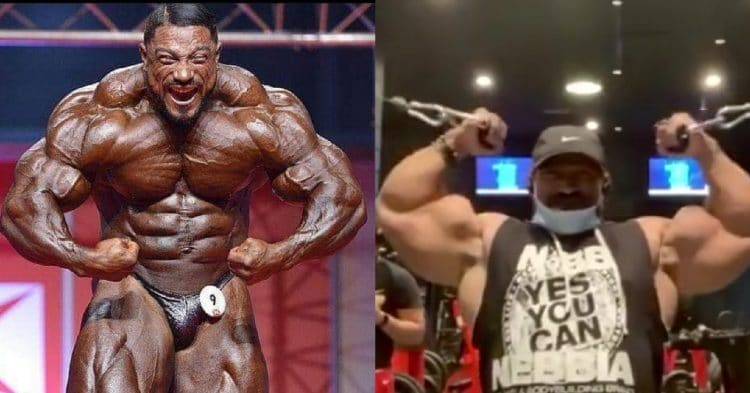 It seems over the last several weeks, that Roelly Winklaar has been cranking his training up to maximum levels. This was evident in a recent update, that showed how enormous his arms are at this point in his prep.

With the Olympia around two and a half months away, all of the qualified athletes are ramping up their training, and this is the case for Winklaar too. He has shared some of his progress so far, and the results have gotten his fans hyped up about his chances to win this year’s event. He always has a way of looking absolutely incredible in the weeks leading up to a big show, even if those results do not exactly translate onto the stage when the time comes. This seemed to be the case again, as his previous updates showed promise for him to bring an absolutely stunning package to the stage this December.

This excitement has only increased, as Roelly Winklaar shared another recent training session to his Instagram. Here he can be seen doing some cable curls, with weight that can not be seen from the angle of the camera. Regardless of how much weight he was moving, what captured fans attention was his insanely massive arms, which were on full display with every rep of the exercise.

It is no secret that Roelly has some enormous arms, that has been known for a while. As he explained in the post, he has even been given awards, simply for having the best arms in the sport. Yet this glimpse of them served as a perfect reminder of the insane size of his pythons.

Save from a singular physique update in the mirror, fans have been mostly kept in the dark about how Winklaar’s physique is coming along. However it is clear that he has been hard at work to prepare for the Olympia, and those results are showing themselves. Another update, a couple of weeks earlier, saw him completely crushing a set of cable rows, and you can you already see how massive his physique is.

In the end, time will tell how much of his insane physique will carry over to the Olympia stage this winter. However it is clear that Roelly Winklaar is not leaving any stone unturned in his prep for this contest.

5 Reasons To Add Tempo Training To Your Program