At 47kg bodyweight, Serena Abweh annihilated all of her competition best lifts in a meet she did not prepare for 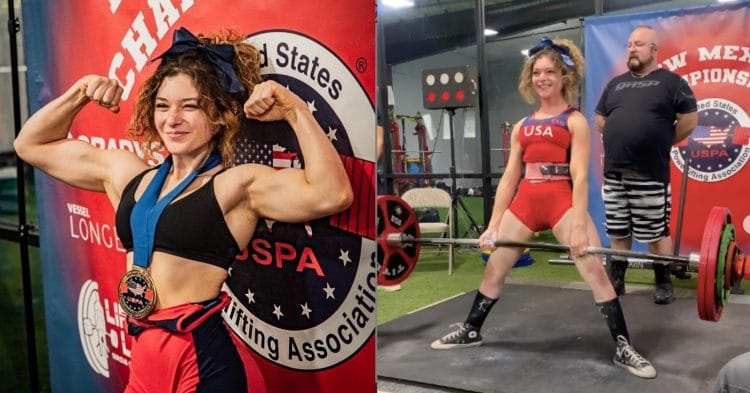 At just 20 years old, Serena Abweh has already become one of the most inspirational and promising young talents in powerlifting. She recently showed up and showed out at the USPA New Mexico State Championships, where she walked away with a slew of new personal records.

According to her Open Powerlifting record, Abweh has only competed in six powerlifting meets during her time in the sport, but has grown a massive following of support. Part of this stems from her harrowing backstory of overcoming an eating disorder, while the other is just the sheer skill of the talented young lifter.

These skills were on display once again with something of an impromptu appearance at the USPA New Mexico State Championship over the weekend. As she explained in a post to her Instagram, she managed to score new personal records with every lift in her outing, which resulted in a whopping 316.5kg (698lb) total.

Here is a breakdown of her three lifts from this meet:

“Got all meet PRS though! Weighed in at 47kg and hit
338lb deadlift, super happy about that
220lb squat
140lb bench
Thank you @legionirongym@garylegion gang for making it such a fun meet!☺️💕”

For Serena Abweh to hit a total that was nearly seven times her bodyweight, during a meet that she was not specifically preparing for, is beyond impressive. It just adds to how incredible of an athlete she is, especially when adding in the fact that she has barely exited her teenage years.

That goes without mentioning the fact that she completely annihilated all of her previous personal records from during competition. While her last major competition seems to have been in 2020, she still beat her meet PR total by a whopping 14.5kg, while competing on a whim.

This just goes to show that when Abweh is competing, she is one of the best in the world at 47kg. It was also a great thing to see her back in action after taking so much time away from competing, even if it would be better to see her fully put in a training camp to compete.

With how young she is, the future seems to be bright for Serena Abweh. If powerlifting become the top priority in her life, she could easily become one of the pound-for-pound best powerlifters in the sport.