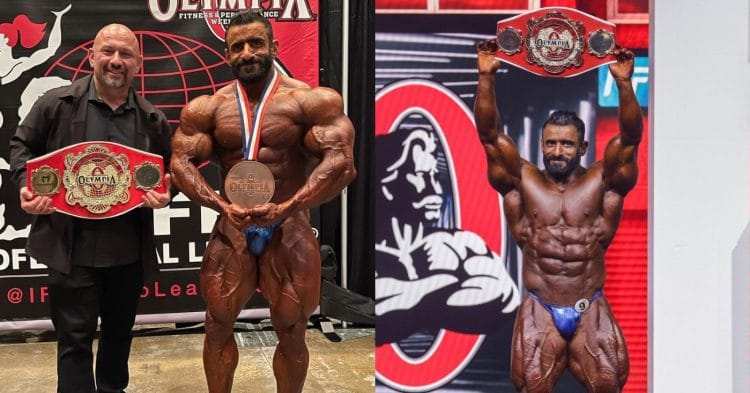 There has been a portion of the bodybuilding community who believe that Hadi Choopan was robbed of victory at the 2021 Mr. Olympia. Hadi’s coach Hany Rambod seems to think he knows why this is the case.

Rambod has been working with Choopan for some time, helping to lead him to scoring as high as second place at the 2019 Olympia. In 2021 though, the Iranian bodybuilder came in third place, even though many felt like he had a better physique onstage, than Brandon Curry and Big Ramy who placed above him.

Speaking in a recent interview, Hany explained what he feels was the reason many people felt this way about his pupil. He believes that it comes down to a matter of the complete physique that Hadi has, as well as the insane level of conditioning he brought to the stage, which has caused this outpouring from fans.

“You’ve got a big guy in Ramy, then you’ve got a guy with shape that still (has) a little bit better shape than Ramy, in Curry, then you have the best conditioned guy, which is Hadi, but he’s also smaller than both of them… I also think Hadi is more complete, but what it turns into is kind of like do you like chocolate, vanilla, or strawberry?” Rambod said.

“At the end of the day, some people probably thought Curry should have won, but a lot of people thought Hadi because I think he was most complete. That’s why a lot of people online are saying he got robbed or he got this or he got that, because I think there’s a certain standard of conditioning that I think people expect in the Olympia. So I think… the argument for Hadi winning is from a conditioning standpoint.”

Hany Rambod Was Not Impressed With Big Ramy

The package that Big Ramy brought to the stage in 2020 to win the Olympia title, was undoubtedly one of the better physiques ever seen. However Hany Rambod says that there were no real improvements made from last year to this year, and if anything, Ramy looked a little worse.

The iconic coach explained that part of what made Ramy’s 2020 physique so impressive was how ripped he was. However with that shredded package not being evident in 2021, he does not think Ramy was as good as he could have been.

“Ramy’s been very, very good for a while, but I think last year he had his breakout year for multiple reasons… He was more ripped last year, to this year. Now is he bigger this year, he might have been. I personally like a more ripped physique, to be able to show off the separation,” Rambod said.

How Can Hadi Choopan Improve?

After being stuck behind Big Ramy and Brandon Curry for the last two years, despite how good he has looked, there are questions about what Hadi Choopan can do to get over the hill and beat these guys. While some might think the answer is more mass, Hany Rambod says this is not the case.

He explained that a few pounds of muscle go a long way with Hadi, so it is easy for him to lose his proportions by bulking up. So the two are going to work on improving the fullness of the muscle, while only adding small amounts of mass.

“(Hadi’s) frame can’t handle that kind of weight. With him, three to five points goes a long way, so I don’t think we need to go much, much higher than that… People go ‘ah, ten fifteen pounds…’ With a guy his height, that would blow out his proportions,” Rambod explained.

“So I think there’s a combination there. The second night (of the Olympia) what we did also, was we came in a bit fuller… After seeing what everybody else brought in terms of conditioning, I’m like this is not a conditioning contest. Let’s go ahead and let’s step it up even further with the fullness, and let’s go ahead and push it a little further.”

What do you make of these remarks from Hany Rambod? Do you think Hadi Choopan was robbed at the 2021 Mr. Olympia?