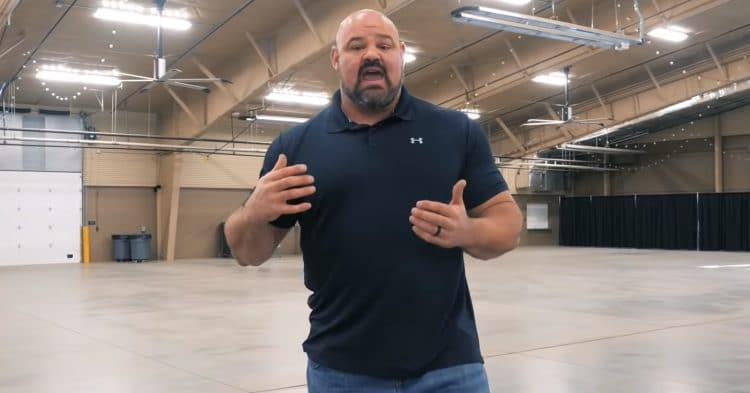 Hot off the heels of last year’s inaugural Shaw Classic, things are being set in motion for the second installment and scouting has begun for a new location.

You can say a lot of things about Brian Shaw, but you can’t say he lacks ambition and will power. When he made a 500k mother of all home gyms he thought to himself “Maan, I got so much stuff here it would be a crime if I’m the only person that gets to play with these giant ass weights”, and thusly he created the “Shaw Classic”. A Strongman competition made by “one of the boys” for “the boys“. It was like the world’s most badass adult version of a play date. Since the world still sucks ass and audiences are yet to be allowed on sports events, the inaugural Shaw classic was a closed event with a limited crew.

However, this is where Brian plans to change things this year. In some shape or form, it’s very likely that crowds will be allowed at sports events. Which would mean, the location will probably not be(or not entirely) in his giant ass barn gym.  After all, he lives nearby, so having a bunch of screaming fans roaming on his land and around his house would not be cool with him and his family.

The potential location is still located in Colorado (where Brian lives) and is surrounded by nature and should things go as planned Shaw Classic could be a whole tourist experience for coming fans. You fly in, rent an airbnb, go sightseeing, check out the mountains, and to top it all off, you watch a live sports event.  Also, even though not yet 100% confirmed-a VIP “meet and greet” option might even be on the table as an option. Not much is yet known about the Shaw Classic but some things are.

Firstly- the date. In the video, Brian Shaw says that the official date for Shaw Classic will be October 29th, 30th & 31st, 2021. You know what that means, right? A Strongman event will potentially be held on Halloween weekend which almost certainly means someone will come out dressed as Bane!

Secondly, as mentioned at the beginning of the text the contest will almost certainly be held somewhere else. Judging by the size of the halls Brian has been scouting, I’d guess the events themselves will be bigger and will probably require a lot of space.

Thirdly, I’m guessing the event equipment will still be supplied from Brian’s colossal man-cave so expect a lot of cool events. Last year Brian brought out the hummer tire deadlift and J.F. Carron and Jerry Pritchet annihilated the event. Who knows what will Brian bring out for year 2, but fingers crossed for a natural stone lift.

Finally, I think we can safely say that were are seeing the last of these annoying lockdowns and travel restrictions. That would mean crowds and a lot more name-heavy competitors both factors which would make this event even more exciting.