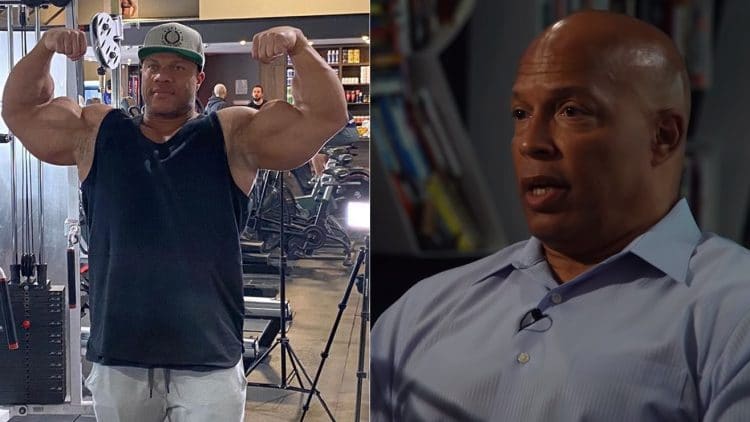 The legendary former Pro bodybuilder Shawn Ray sat down with the very popular Patrick-Bet David in a lengthy interview recently where the two discussed many topics related to bodybuilding and the Mr. Olympia brand. Well, if you’ve followed or are familiar with either of these guys you’d know that having them together in one room would likely make for some very interesting content and it surely did not disappoint.

Patrick-Bet David is known to interview top names in the industry and he’s arguably one of the best at it too, while former Arnold Classic champion and 2x Mr. Olympia runner-up Shawn Ray is known to be very outspoken but is also incredibly knowledgeable by the same token.

Well, there were definitely a few heated moments but overall the discussion was very eye-opening and touched on many of the concerns about the current status of the Olympia brand. For one, the fact that there isn’t as much motivation/ incentive for the guys at the Olympia who aren’t within the top 10. Plus, they talked about Phil Heath and participation from other top competitors where it relates to the popularity of the contest.

This specific discussion starts at around the 49:40 mark…

Sure, Chief Olympia Officer Dan Solomon is doing a great job with the responsibilities that were given to him but Shawn Ray explained that the former’s job, is to keep the athletes happy at the Olympia. But apparently, there needs to be someone who can step in and make the competition more appealing to all of the competitors on a wider scale. And that’s where Joe and Ben Weider were so different in that they were all in and dedicated to every aspect of the sport.

Shawn Ray talked about how bodybuilders nowadays are so in control of everything due to social media that it’s hard to get them to market themselves outside of that. He made the point that bodybuilders nowadays also don’t necessarily have any type of mentorship and then when something happens or an athlete gets into some trouble then it’s like they’re on their own.

So the point here is that there is no one currently who is as passionate as Joe Weider was and as a result, that unity has faded and now the competitors are more divided than ever. Patrick-Bet David proposed that he would bring the bodybuilders in, show them the numbers and see if everyone would be on board with working together to achieve a certain outcome.

But Ray explained that social media makes it so possible to monetize on content, that it would be hard to do without offering compensation. However, even with the absence of unification, the legend did mention that

“the Olympia is still bigger than it has ever been, in terms of attendance, in terms of prize money, in terms of participation and now they’re adding another division (Ms. Olympia).”

Plus, parent company AMI still has its publications and involvement with celebrities to draw more people in. Another point Shawn Ray was trying to make was that even though the competitive aspect may have not been up to par especially last year seeing as many of the top guys from previous Olympias did not compete; the Olympia still sold out regardless.

“We didn’t need them,” explained Ray (referring to Phil Heath, Shawn Rhoden, Ramy and Kai Greene not participating in 2019).

He also made a good point in that it was Dan Solomon’s first run at promoting the event so you can only imagine how much it’ll grow and attract in the coming years. Not to mention all of the new things happening in the different divisions.

“There’s still the x-factor of does Phil heath come back or not“.

But Patrick-Bet David responded by saying that someone needs to call Heath and ask what needs to be done in order to have him back at the Olympia.

“I’ll tell it like it is love Phil, the brand is doing just fine, the Olympia doesn’t need Phil Heath to make the Olympia.”

But he still believes Heath should have at least been at the prior Olympia to hand out the trophy if anything as it is the competition that made him who he is.

But Patrick-Bet David was adamant about suggesting the organization should have been reaching out and according to Shawn Ray they did, but apparently, Heath had other plans rather than attending the Olympia.

David then gave an example to get his point across before saying that, “the brand cannot say we’re bigger than a 7x Mr. Olympia even though it’s right, I’m not telling you it’s not right.”

Ray’s response to this was,

“I’m not saying that they said that, what I’m saying from my cheap seat is the Olympia will go on whether you have a 7x Mr. Olympia sitting in the front row or sitting at home, there’s always been an open-door policy“…

“If you’re waiting for a phone call for an invitation to a contest of that magnitude when you actually know the promoter, I can’t sit at home and wait for my phone to ring I have to be proactive are you kidding me. The Olympia was bigger and better than it’s ever been even though Phil wasn’t there. All I’m saying is that the Olympia is bigger than any bodybuilder, it’s an institution.”

Bet David then brought up an example of… “If boxing gets cocky thinking they’re not going to lose eyeballs to UFC, Dana White is going to come and take it over.”

“To say that a Rock is complementing (in reference to Athleticon), I don’t think even think Rock is the one that would be my concern. If Dany (Dany Garcia/movie producer) by any chance gets the itch to want to really go up, Dany can pull the strings and do whatever she wants because she loves bodybuilding”.

Patrick-Bet David ended with… “For me, I would like nothing more than to see the Mr. Olympia get even bigger than it is today.”

Jonathan Cayco Does A Dance, Then Wrecks A 735lb Deadlift