Sherine Marcelle's record-breaking performances seem to be the norm these days. 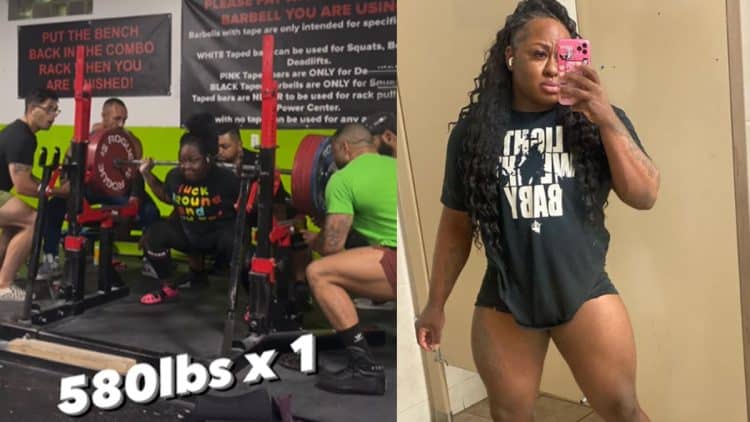 Sherine Marcelle gained fame for her squat prowess, but that mainly included squats with knee wraps, which is not considered raw by powerlifting standards. However, Marcelle announced in early June that she would not participate in the Wrapped division this year, leaving some speculation as to whether she would instead compete in Raw. This could very well be the case, as Sherine Marcell just squatted 580 pounds (263 kilograms) raw for a new Personal Record.

It seemed like 580 pounds (263 kilograms) was Sherine Marcelle’s absolute limit, since she barely broke through the sticking point just before locking the weight out. However, that was completely understandable seeing that her new PR was 15.7 pounds (7 kilograms) heavier than the All-Time Raw World Record in the 90-kilogram weight class. The legendary Amanda Lawrence currently holds that record, having squatted 564.3 pounds (256 kilograms) at the 2020 USAPL Gainsgiving Open.

“These are the moments I live for . The ones where I doubt every being in me and still show up.”

Sherine Marcelle also unofficially broke this same squat World Record just two weeks ago, when she performed two reps with 568 pounds (257.5 kilograms). So, it is obvious that she is very capable of outperforming Amanda Lawrence’s historic lift even without perfect circumstances. It is now also very likely that Sherine could become the first woman in the 90-kilogram weight class to squat 600 pounds (272.2 kilograms) raw.

The progress Sherine Marcelle has made over the past few months has made it inevitable that she will claim a World Record. Sherine’s greatest success so far is scoring the U90KG All-Time Second-Heaviest Squat W/Wraps of 617.3 pounds (280 kilograms), which she lifted at the 2022 WRPF Ghost Clash. That happened in February, which was also her last time competing.

*Sherine Marcelle set all of her raw competition PRs at the 2021 USPA New York State Championships.

There is still a chance that Sherine Marcelle will be able to demonstrate her new and improved raw squat abilities at a sanctioned powerlifting competition and can record her feat there. On the other hand, the longer we wait, the chances are that Sherine will get even better, which would ultimately result in an even more sensational performance. The fact that she is constantly setting new personal records indicates that everything is going according to plan for her.