"The Sultan of Symmetry" discussed a number of issues including past trauma, his bodybuilding career, and placing runner-up to Ronnie Coleman at 1998 Mr. Olympia. 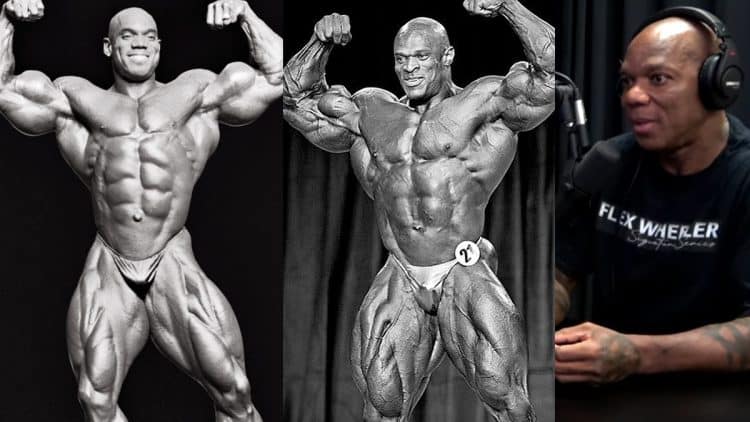 Becoming one of the best bodybuilders in the world comes at a cost, and four-time Arnold Classic winner Flex Wheeler is familiar with many of those sacrifices. In a recent YouTube video, Wheeler discussed the trauma endured throughout his career and gave his thoughts on nearly winning the 1998 Mr. Olympia title against Ronnie Coleman.

Flex Wheeler was a prolific Open class bodybuilder known for aesthetics during his time as an active competitor. He’s appeared on the Mr. Olympia stage a number of times and has pushed some of the sport’s most recognized legends to the brink of defeat. In addition to battling eight-time Mr. Olympia Ronnie Coleman on stage, Flex also competed against six-time Olympia winner Dorian Yates and bodybuilding veteran Shawn Ray.

During his career and after, Wheeler, unfortunately, suffered a series of health setbacks, which are still plaguing his life today. In 2019, blood clots and kidney failure left him incapacitated in the hospital. Shortly thereafter, doctors informed Wheeler that he would need to have his right leg partially amputated or he risked death. After the harrowing procedure, Flex found himself hospitalized once again due to kidney failure while fighting a Covid diagnosis.

Despite his difficult childhood and persistent health problems, Wheeler is an open book about the struggles he’s endured. Recently, the bodybuilding legend joined Dennis James on a podcast and revealed that his 2003 transplanted kidneys are beginning to show signs of failure.

He also elaborated on many of these health issues in a recent video with seven-time 212 Olympia winner Flex Lewis. With hopes of spreading a positive message to anyone struggling, Wheeler and Jay Cutler took part in a candid discussion about Flex’s career and past trauma.

Flex Wheeler Reflects on Career and Mental Health: ‘I Was Very Dedicated to Trying to Take my Life’

During a recent video with Jay Cutler, Wheeler discussed getting into bodybuilding and his mental health.

“I didn’t know anything about bodybuilding, dieting or diuretics, so I took one deca for the show and tried to be the best. I didn’t hit the 90 percentile right away, but I kept getting better. I was rough around the edges and thought the only way I could get better was in the coffin, but the truth is I was in my 90 percentile the best I could be, and I chased after whatever the winning physique was,” Flex Wheeler shared.

After getting into the sport, Wheeler said he chased ‘whatever the winning physique was,’ and tried to emulate other notable bodybuilders like Phil Hill.

“I just emulated other greats, like Phil Hill, who had massive legs and did the splits, and I thought I could do it too, so I taught myself the pose.”

Wheeler looked back on the first time he tried to kill himself.

The first time I tried to kill myself, I was very dedicated to trying to take my life. I look at pictures of myself smiling and I wish I loved myself more. The last time I was in a hospital was just so horrible. My heart did something eight times in a row and I was told I had to keep breathing or else I’d be taken off with the medication.”

According to Wheeler, his ‘dark thoughts’ about dying prevented him from sleeping but ultimately triggered him to change.

“I couldn’t go to sleep because I had dark thoughts about dying. I wondered when people who passed away realized they were not here anymore. I realized I’m not hearing, I don’t want that, so I decided to live as hard as I can and embrace life, the pain and everything else.”

In Wheeler’s opinion, a lot of bodybuilders have been sexually abused and/or beaten up as a child.

“Bodybuilders are often loaded with confidence, but the truth is that a lot of them have been sexually abused and beaten up as children. I fought in martial arts but I couldn’t bring myself to hit someone because I was afraid I would break their nose or ribs. So I would just take the ass whooping because it didn’t hurt.”

Wheeler explained that his struggles prompted him to create a ‘character’ called Flex Wheeler — someone who was never afraid of a fight.

“I developed a character called Flex Wheeler who didn’t mind fighting and would hurt people if they wanted to make it happen. I started buying more into the character and eventually became Flex Wheeler all the time”, says Wheeler.

“When you try to put on a facade, you realize who you really are. Therefore, you have to realize the truth before you can tell a lie. When I started trying to identify and wanting to change,” says Wheeler.

Flex on Placing Runner-up to Ronnie Coleman at 1998 Mr. Olympia: ‘I was Green, I Knew I Didn’t Put Everything into It’

Next, Wheeler reflected on coming extremely close to winning an Olympia title in 1998 against “The King” Ronnie Coleman.

“Ronnie won Mr. Olympia 1998, and I wasn’t really caring because I was so green. But I knew I didn’t put everything into it, and I was ashamed of myself. In 98, I was second in the Olympia, and I remember the pressure of being the next in line to win.”

Despite coming up short at 1998 Olympia, Wheeler and Coleman harbored no ill feelings after the show.

“Ronnie is posing and his back has more muscular than mine, and I’m looking at his lower erectors and I’m like wow, his back is more muscular than mine. We end up taking a taxi back together. Ronnie won the pose down round and the posing round, and I understood that was the only way he could make up the points and come and get me. I remember Ronnie making kind of eye contact with me before the match, but then we just went and did our battle.

I went over to Ronnie and whispered in his ear, “Congratulations, I love you” and he said “joking”, “I’m not gonna be at your party tonight” and I went back to my party. I was more proud of myself,” said Flex Wheeler.

Wheeler says Phil Heath Had Mr. Olympia ‘Written All Over Him’ After Getting First Impression

“Phil Heath was a freak, and I had input on how he should train, but I also brought the mental aspect of the game to the table for him. He’s got the body, but the mind is there [too]. I couldn’t wait to see this kid in person, because I’ve heard great things about him, and I want to know what his potential is.”

Once Flex got to see Phil Heath’s back and pecs, he knew “The Gift” would be a potential Olympia champion.

“I felt that he has Mr. Olympia written all over him, so do you? I can play a video of Steve Weinberg, and we can talk about it. When you look at the back of the man, it looks like he has mountains and crevices of back. Look at that freaking feathers in the pecs and it’s like two weeks before the show [he’s going to compete at].”

Even though Wheeler has been through a lot during his career, his love for bodybuilding is still felt in the league today. He is responsible for training Men’s Open standout Andrew Jacked, who recently found success in first place at the 2022 Texas Pro last month.

While Flex Wheeler never won a coveted Olympia title, his graceful stage presence and aesthetics always made his contests special. In spite of his health issues and past trauma, he remains a pivotal figurehead in the sport who many can draw inspiration from.