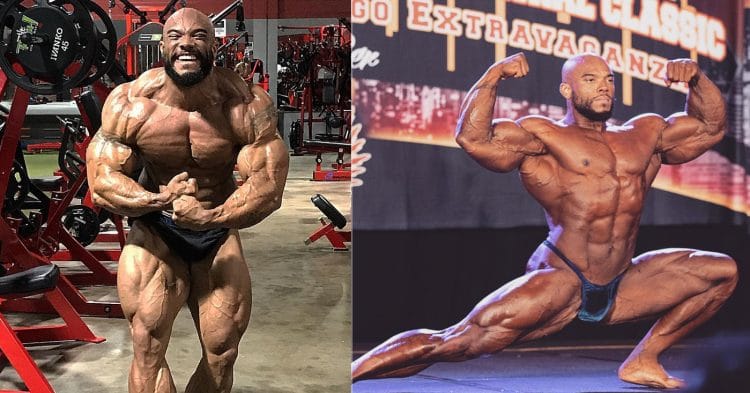 Sergio Oliva Jr. is an Open division bodybuilder. This is his complete profile, biographies, training regimens, diet plan, and more.

Sergio Oliva Jr. is originally from Chicago Illinois.  He is the son of three-time Mr. Olympia champion, the legendary Sergio Oliva, famously known as the Myth.

As a kid, Oliva’s father didn’t take him under his wing to try and continue the bodybuilding legacy. In fact, he was discouraged from prioritizing lifting over his studies. His mother also competed in bodybuilding and was actually more supportive in later years, having spent more time with him in the gym than anyone else.

Oliva Jr. ran track in his younger years and was pretty darn good, even becoming 2nd in his state. However, he eventually fell out of love with track.

Then following high school he just began weight training on his own and noticed how fast he was getting results. His father still wasn’t having it and went as far as to call gyms to prevent him from joining.

So to avoid this, Sergio Oliva Jr. moved to Destin, Florida where he began his bodybuilding journey.

He explained in an interview with bodybuilding legend Shawn Ray, that he started as a middleweight weighing 176 lbs. So he won some shows and became the top guy there but he eventually realized that he wasn’t growing anymore.

As a result, he moved back to Chicago and eventually earned his Pro card.

“There has been a lot of times where it was actually my mom who kept me motivated and kept me going. So really if it wasn’t for her, I wouldn’t be here“.

Sergio Oliva Jr. started his journey in 2006, placing 3rd at the Southern in the middleweight division. Then he won the 2007 Panhandle showdown in the light-heavy class. He followed up by winning the 2008 Mr. Northwest Florida in the Heavyweight and overall.

In 2015 he earned his Pro card at the NPC Nationals and has competed in several competitions since then, with his best finish being 1st at the 2017 New York Pro.

Oliva Jr. would finish a disappointing 16th place at the 2018 Mr. Olympia competition. He took 2019 off and came back better than ever, finishing 5th at the 2020 Arnold Classic which is the second most prestigious competition after the Olympia.

Besides bodybuilding, Sergio Oliva Jr. has appeared in SUPPS: The Movie (2018) and Bigger (2018). He’s also the CEO of Victory Clothing, President of the supplement brand Cosmic Industries, and a Titan Grips athlete.

Oliva Jr. is, of course, focused on being the best bodybuilder in the world aside from his business endeavors and he’s not content with just building up a resume to make some money from his knowledge and accomplishments.

He currently resides in California.

Sergio’s routine varies based on his goals and the muscle groups he’s training. Here’s a sample chest routine that he did 4 weeks out from the 2020 Arnold Classic with coach Chris Cormier.

Diet and quantity of food always changes depending on how far out a competitor is from a show. Here’s what Sergio Oliva Jr. ate four weeks out from the 2020 Arnold Classic.

He did fasted cardio and then it was time to eat!

2 cups of rice (when training big muscle groups), 9 oz chicken, asparagus. He uses some sugar and fat-free BBQ sauce of which he cuts out 2 weeks from a show.

He’ll then train after these two meals.

For his last meal of the day, he’ll have 12 egg whites.

Sergio Oliva Jr. has made some huge strides from a kid running track to placing top 5 at the prestigious Arnold Classic competition. He continues to improve and with those genetics and hard work, we expect him to be a top competitor and real threat to the Mr. Olympia title in the coming years.