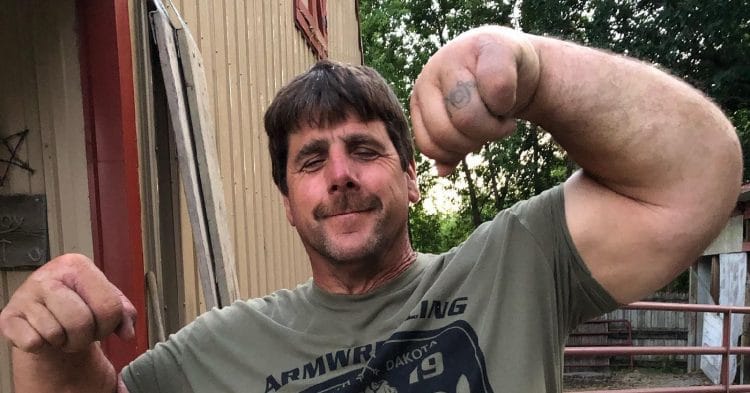 Growing up you may have seen a of the classic Popeye the Sailor Man cartoons, about a man with enormous forearms, who ate spinach through his pipe to save his damsel in distress. However what you may not know, is that Jeff Dabe has some forearms that would make Popeye green with envy.

From the moment he was born, there was something different about Jeff. Although there was nothing specific that doctors could point to, he had hands that were abnormally large for an infant. Despite not being able to find a cause, things would only continue from there, with his forearms also increasing in size. Eventually he would become a full grown man, with forearms that were bigger than what some people can make synthetically.

Naturally, with appendages like that, Jeff Dabe was drawn to arm wrestling. He was pretty successful too, being able to back his arm size up with actual strength. He said that people were initially shocked at the size of his arms and hands, but that they eventually grew to respect his power. Unfortunately he would blow out his right arm while competing, forcing him to stop. Yet this did not stop him from being a part of the sport, and posing with some pretty big names.

In addition to his arm wrestling accomplishments, Jeff holds some pretty notable records to his name. His enormous forearms measure in at a whopping 19in! Not only that, but as he explains in this video, his ring finger is an insane 4.78in around, making his size 38 wedding ring the biggest ever seen.

Nowadays, Jeff Dabe is 50 years old, and looking to make a return to arm wrestling. Although with his right arm having been blown out, he is forced to use his left arm. Nevertheless he is still successful, and is back to doing something he loves and was born to do.