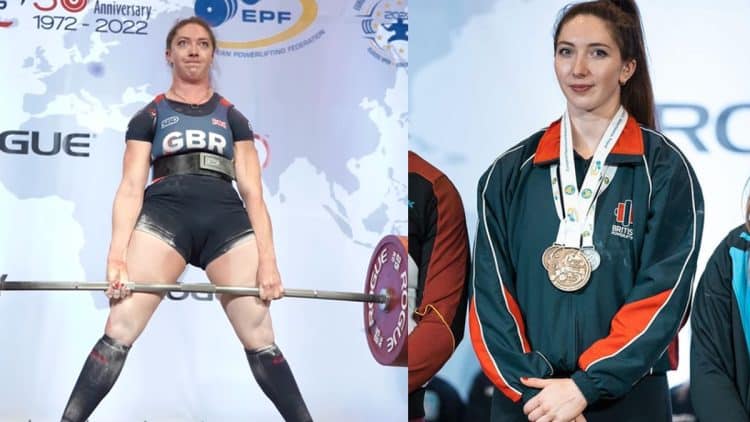 Sophia Ellis is one of the greatest powerlifters Great Britain has ever produced, as evidenced by her numerous achievements. Her performance at the 2021 EPF Euros last year was one of her biggest career highlights, but she has now achieved an all-time career high. Sophia took part in the 2022 EPF European Classic Powerlifting Championships which took place from November 25th until December 4th, in Skierniewice, Poland. She won the 76-kilogram weight class and scored two British Records, as well as a 240.5-kilogram (530.2 pounds) European Deadlift Record.

Sophia Ellis has always excelled on the deadlifts, but her skills still amazed the crowd at the 2022 EPF European Championships. She started off with a 220-kilogram (485-pound) pull, but quickly jumped up to a record-breaking 240.5 kilograms (530.2 pounds). Sophia also held the previous European Record of 240 kilograms (529.1 pounds), which she set at the 2022 IPF Arnold Sports Festival a few months back.

“This still feels so surreal but I won!! European Champion 2022!🥇🇬🇧

It means the absolute world to me to have won this championship and stand on top of that platform.

I know Dad is looking down, celebrating with me ❤️

Thank you so much to everyone who watched and supported. And to my GB Team mates who are smashing it themselves, I’m so grateful to have you all in my corner.”

Sophia Ellis weighed in at 74.34 kilograms (163.9 pounds) at the 2022 EPF European Classic Powerlifting Championships. She was successful in attempting all nine of her lifts, which resulted in new records and some PRs. Sophia equaled her bench press Competition PR and only failed to match or beat her previous best in the squat event.

*Sophia Ellis has a heavier squat competition PR of 170 kilograms (374.8 pounds), which she scored at the 2022 IPF World Classic Powerlifting Championships.

This was the 28th sanctioned powerlifting competition for Sophia Ellis and her 13th victory. After years of getting podium finishes at the biggest international competitions, she has finally gotten her victory.

Now that Sophia Ellis has climbed her throne, she will put in even more effort to defend her title. The next step is the 2023 IPF World Championship and there is no doubt that Sophia will be one of the favorites for gold there as well.