Less than two weeks from 2022 Olympia, Mamdouh ‘Big Ramy’ Elssbiay checked in with Phil Heath and promised his absolute best. 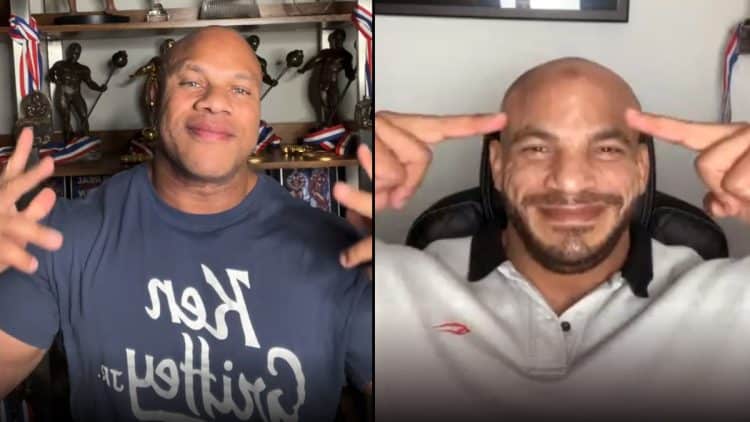 Mamdouh ‘Big Ramy’ Elssbiay plans to cement himself as a three-time Mr. Olympia winner in less than two weeks. In a recent Instagram live with Phil Heath, Ramy discussed his prep and revealed his stage weight at 2022 Olympia will be approximately 295 pounds.

Elssbiay’s combination of size, muscle mass, and conditioning led to impressive showings at past Olympia contests. En route to winning the sport’s most prestigious title in 2020 and 2021, Ramy proved himself against top-tier contenders like Brandon Curry, William Bonac, and Hadi Choopan.

This year saw a huge influx of talent storm the IFBB Pro League. While once relatively unknown, new threats in the Men’s Open division continue to emerge like Nigeria’s Andrew Jacked and mass monster Michal Krizo. Given the new talent and former contenders from last year’s Olympia, many believe Ramy will be pushed at the upcoming show.

Compared to seasons prior, however, Ramy has been far more open about his progress ahead of the scheduled title defense. In addition to several physique updates, Ramy has showcased many of his training sessions, led by his coaches Chad Nicholls and Dennis James. Nicholls, who also coaches 2022 Boston Pro winner William Bonac, believes both of his clients will nab first and second place, respectively,

Similar to Big Ramy, Phil Heath also ruled over the Men’s Open division. Having captured the title on seven occasions, he is widely recognized as one of the most successful athletes in the sport. While there was speculation about his return to bodybuilding, Heath will instead commentate on the upcoming 2022 Olympia contest. With mere days until the competition, Heath sat down for a one-on-one with Elssbiay.

Big Ramy Opens Up on Pressures of Being a Reigning Champion, Reveals Stage Weight of 295-Lbs

Ramy acknowledged the difficulty of trying to win Mr. Olympia contests year after year. He specified that his goal is to stand on the 2022 Olympia stage at around 295 pounds.

“Me and Dennis, we spoke last week that it’s too hard for people who win the Olympia many many years like Phil [Heath] like Ronnie [Coleman]. It’s too hard when you think about the next one because you need to bring something bigger and everything to not let the fans [down]. That means you have to work harder than anybody and that’s not easy for anyone. That’s the main thing for a champ,” Big Ramy said.

Just a day ago (Dec. 5, 2022) Ramy revealed he was waking up at 306 pounds. He added that he and his team are working hard to ensure his conditioning overpowers past packages he brought to the Olympia stage.

“Yes, let’s start talking about that, who will come with the better package. I think the better package for me is to come complete because I’m wider and I have many things when I come a little bit later [after prejudging], I get my weak points [to disappear]. It’s not just me, it’s me and my team working very hard to come early. We have everything [we need] for condition.

We don’t like to rush our sets. We don’t like to be crazy or do something crazy. I think now, I think from three weeks, we are fine and [we are] just waiting for the show. We are working very hard right now but also, we are fine. I feel good. Today, morning, 306 [pounds]. Yeah, my stomach but I think the last week we’re going to drop more weight and it will be I think 295 on the stage,” Ramy said.

According to Ramy, maximum weight doesn’t always garner the best results on stage. The reigning champion is adamant that bodybuilders must bring their best shape as well.

“I said to everybody when they ask me, ‘what do you think about your weight?’ I said, ‘every year I can’t gain five kilos,’ — you can’t do that because you’ll have bad symmetry at the maximum weight. You have to know what is your best shape and your best weight is,” says Ramy. “You have to get at the best point [of weight and shape] for yourself.”

Ramy ‘Respectful’ of His Competition, Believes Derek Lunsford Has a ‘Great Chance’ This Year

When discussing potential opponents, Ramy sees all of the top contenders from last year as a challenge. He named Andrew Jacked and Derek Lunsford as talent who could also have an impact on the final outcome.

Andrew Jacked is great. Everyone. Derek [Lunsford] has a great chance. We have Nick [Walker], we have Hadi [Choopan], Brandon [Curry],” said Ramy. “Bodybuilding is growing very well. You go to China, Brazil, it’s crazy man.”

Ramy admitted he had the worst year of his life in 2021. Despite that fact, he still managed to win the Mr. Olympia title. His forecast for this year is much different as he believes he will be at his all-time best in less than two weeks.

“Last year, I had the [worst] year of my life. I can’t talk about that because that just gives them reason to [have me] lose.  But when they ask about my fire, about my dream to be Mr.

Olympia again, I said to myself: you are strong, you have a great mentality, and I think in my heart I think I can’t lose again because in the best of time, this is what I gave. If you focus on your dream and that’s it and hide your eyes from all other problems because you have just your dream — from this day, I can come [and] have my best run and be better than ever.”

Ramy’s contest preparations have heated up as of late. The reigning champ smashed incline dumbbell presses for reps with his coach Dennis James recently. He’s been open about his ambitions and goals for this season too. Ramy specified that his overall conditioning was a weak point that he needed to correct before performing on stage.

While Ramy is respectful of his opponents, he believes he’s unstoppable with the right shape and weight. With plans of being better than ever, he hopes to walk away as a three-time Mr. Olympia before the end of the month.