Ahead of UFC 264: Dustin Poirier vs Conor McGregor 3, the strongmen that were at the 2021 WSM offer their predictions 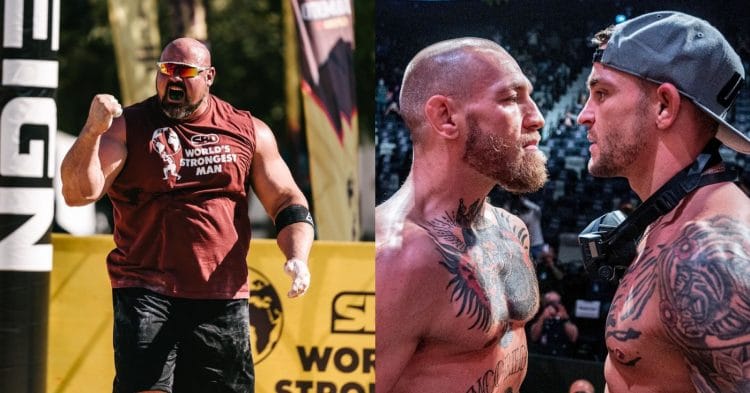 UFC 264: Dustin Poirier vs Conor McGregor 3 goes down this Saturday, July 10th, live on PPV. Ahead of the massive rubber match, the athletes who were at the 2021 World’s Strongest Man weighed in on who they thought would win.

The 2021 WSM went down last month, with a ton of exciting action over the course of the event. However athletes also took a minute to give their thoughts on the upcoming Poirier vs McGregor 3 bout.

After Conor won the first fight in 2014, they clashed again earlier this year. This time around, Dustin was the victor, knocking out the former lightweight and featherweight champion in the second round, setting up the rubber match for this weekend, with a ton on the line for both men and their legacies in the sport.

Ahead of UFC 264, the UFC posted a video to their Instagram, where some of the competitors for the 2021 World’s Strongest Man, as well as Eddie Hall and Big Z gave their predictions for Poirier vs McGregor 3. In the end, Dustin would win the majority with 7 votes to 6.

This is how the strongmen voted:

It is not too surprising to see that the results of this poll was so close, especially given that this lines up with the majority of the odds in place for the fight. The bookies have both men fairly even money, with most outlets favoring Dustin a little.

Equally expected was the fact that Brian Shaw picked Dustin to win, saying that he was in the Louisiana native’s corner for the fight. The two got to train together shortly after Dustin knocked Conor out, even grappling and throwing hands together.

In the end, the UFC 264 main event between Dustin Poirier and Conor McGregor is going to be a closely contested bout with results that will be hard to determine until they lock horns for the final time this Saturday, June 10th. You can watch the action live along with these World’s Strongest Man veterans by purchasing the event on pay-per-view.